London’s Docklands Light Railway, known as the DLR in local shorthand, is the UK’s busiest light railway network and one of the vital transport arteries for business and leisure in the sprawling British capital. It is operated by French transport specialist Keolis and British infrastructure engineering firm Amey, under the joint venture KeolisAmey Docklands.

The service is responsible for the comfort and safety of more than 117 million passengers each year, giving the transport network an enormous impact on the economy, and the day-to-day lives of Londoners and tourists alike. Cutting through the city’s financial hub in Canary Wharf, the line also feeds into convention centres and cultural hotspots, as well as residential areas and retail destinations. Though the pandemic has significantly reduced the number of passengers over the past 18 months, it is a responsibility that Natalia Pickett, Head of Procurement at KeolisAmey Docklands, takes incredibly seriously.

“Safety is a word I say a million times a day, because whichever solutions we implement, services we buy or technology we deploy, the safety of our passengers, staff and transport crew is the most important factor - always,” she says.

Pickett’s procurement division is responsible for sourcing and implementing everything from humble paperclips in the back office, to the 30-plus ton, complex rolling stock that ferry people between destinations along the DLR routes. When someone once asked Pickett’s husband what his wife does for a living, he joked that she is a “professional shopper, at an industrial scale”. To some extent, she says this is true: “If you imagine your thought process at the DIY shop when you’re redecorating the bathroom, there are parallels to the considerations in my professional life: whether the product is good quality, safe, value for money. But there is much more to it than that."

Pickett describes herself as part matchmaker, part problem solver - the key to both being partnerships. “Those are really the core of my work, and I’m pleased to say that the team and I are very good at it. Procurement is not only about saving money. That is fundamentally not true; savings will be the neutral outcome of procurement processes,” she says.

“Partnership is another of those words I repeat a lot, because it is very important to me. With my suppliers, we must learn from one another, bounce ideas between one another and grow together; it is almost love,” she jokes. “We need to reach the stage of the relationship where we can talk about the good things, the bad things - it doesn’t matter to me. As long as we’re talking then we can find a solution, which is what procurement is really all about.”

Pickett and her team operate in a unique procurement environment. Unlike malleable sectors such as IT, procurement in the rail and wider transport industry runs at a more cautious, measured pace. Safety concerns mean Pickett is unable to “simply change a nut here and a bolt there because it is cheaper”, but these stringent regulations do crystallise a fundamental level of quality adherence not often present in more agile sectors.

All suppliers in the rail industry can be found on the Rail Industry Supply Qualification System, a sector-specific database which holds all their insurances, certifications, licenses and financial information. “It makes my job quicker,” Pickett says. “And it also makes suppliers’ lives easier because they don't need to answer all those same questions again for me.”

Pickett’s teams also leverage a suite of other digital procurement tools, though she admits she may be considered “a little old fashioned” in her approach to digital transformation. “I don’t like to use lots of different computer systems and pieces of software,” she says. “I find that the more systems you use, the more noise you have to deal with. But we do use Microsoft Dynamics and IBM Maximo, which is a very robust asset management ERP system and very important to our procurement analysis. Using this system I can instantly know what a good is, how we bought it, what we spent and use the information to review our categories. From a digital perspective, they are enough for us.”

Not all Pickett’s procurement efforts are dedicated to steel, tracks and carriages. Services play an equally important role in keeping passengers and staff safe and comfortable. That comes with its own set of challenges, particularly as the size of KeolisAmey Docklands belies its impact. “We operate a large service, but our actual company is only around 860 employees, which is nothing compared to the biggest networks. We can be limited in finding suppliers that want to work at that scale,” she says.

After around a year of negotiations to secure a quality occupational health provider, Pickett encountered Medigold Health. “They were different. They were keen to work with us, but beyond the usual services, it was apparent that they care about our staff as much as we do. They offered insight into how to reduce blood pressure, how best to approach dietary requirements. When we inevitably have staff off sick, they help us bring people back to work as swiftly as possible, because while we are paying them on leave, we need to cover their job, meaning we are paying twice. But this is not about simply pushing people back to the track, it’s about caring for our staff while minimising spend, and Medigold are a great partner for that.”

Another example of this close collaboration is Xrail, a rail services supplier which provides trackside cabling to KeolisAmey Docklands. Xrail was discovered through the Rail Industry Supply Qualification System, though none of Pickett’s team had heard of their work previously.

“But we followed procedure - as is our mantra - and invited them for a presentation,” she says. “And then the magic happened. This sounds like such a matter of fact, one-dimensional job on the surface but they are so passionate, so innovative, and we all thought: ‘wow’. We awarded them the contract, and they have been fantastic.”

Pickett’s decision to offer Xrail the contract was further vindicated some months later. While sleeping rough at an organised event to raise money for The Railway Children Charity, she encountered Monica Barbosa, Xrail Group’s Director of Business Development and Communications. “It was an accidental meeting, but we got to talking and realised we are cut from the same cloth,” Pickett says. “It was an interesting experience and great to know we’re passionate about the same values. This is what I mean when I talk about the importance of partnerships that go beyond saving money.”

Pickett’s partnerships extend beyond London. The joint venture between Keolis and Amey expanded in 2017, landing the contract for the Manchester Metrolink, a light rail network that is the largest of its kind in the UK. Procurement played a central role in the project, but it was largely invisible - and that was by design.

“We began by providing numbers and what we can achieve with suppliers, but procurement’s real role in the launch of this service was in the realisation. Our job was to ensure that day one looked no different to the previous day. So when the new franchise started on 1 April this year, nobody noticed. The suppliers delivered on time, the network didn’t stop, and that was our real achievement. The purpose of my role is to make sure that everything works and I’m not noticeable. It’s similar to HR: why should anyone notice if everything runs nice and smooth? So well done to us.”

When KeolisAmey Docklands was awarded the ISO 55001 asset management certificate, “we were very proud of it”, Pickett says. “And I'm particularly proud of the fact that to get this certificate, we as a procurement function didn't need to do anything extra.”
Pickett hopes to remain quietly exceeding expectations and out of the limelight in the coming year, when commuters begin returning to work and cities reopen to tourists. “I think in 2022, we will be back to business as usual. And I will do all my standard efficiencies projects, and we have taken over maintenance of the Lewisham extension - seven stations in south London. It will be a time to achieve efficiencies. Nothing is certain, but this is the plan.” 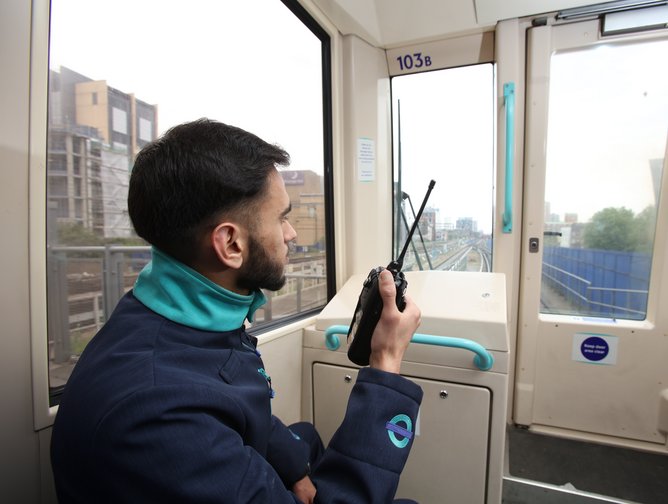