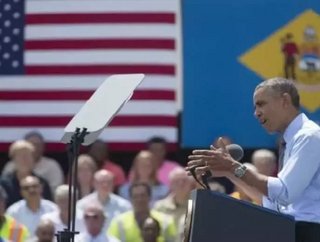 The Board of the Association for the Improvement of American Infrastructure (AIAI) has reacted positively to President Obamas announcement last week reg...

The Board of the Association for the Improvement of American Infrastructure (AIAI) has reacted positively to President Obama’s announcement last week regarding the Build America Investment Initiative.

The President spoke about the importance of long-term investments in America’s infrastructure in against the backdrop of Delaware's currently-closed Interstate 495 Bridge, where he announced the program to attract greater private investment to help fund new roads, bridges and highways.

In a statement, AIAI said: “(We) applaud the efforts of President Obama’s Build America Investment Initiative, which aims to boost infrastructure investment and economic growth through increased national use of Public Private Partnerships (P3). AIAI looks forward to learning more details on the role of the Initiative and the Build America Transportation Investment Center as this develops.”

The Build America Transportation Investment Center is being launched as part of the wider investment initiative “to serve as a one-stop shop for cities and states seeking to use innovative financing and partnerships with the private sector to support transportation infrastructure,” the White House said.

The expertise of the private sector complements the public sector’s capacity to design, finance, build and deliver public infrastructure projects quickly, efficiently and cost-effectively, providing much needed congestion relief to our nation’s transportation arteries. AIAI commends the efforts of President Obama and this pro-P3 initiative as they recognise the importance of private sector involvement in solving the National infrastructure crisis.”

The Association for the Improvement of American Infrastructure is a non-profit organisation formed to help shape the direction of the national Public Private Partnership marketplace. AIAI serves as a national proponent to facilitate education and legislation through targeted advocacy.

AIAI’s Board of Directors has national and international experience and industry knowledge that provides the Association with a clear direction for developing and advocating policy and legislative solutions, allowing more equitable and effective partnerships across diverse market sectors from transportation and energy to educational, health and public service institutions.