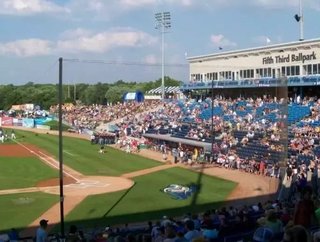 Every spring, millions of baseball fans pack stadiums across the country to root for their team as they kick off the season. Yet, after a January fire s...

Every spring, millions of baseball fans pack stadiums across the country to root for their team as they kick off the season. Yet, after a January fire sparked by a heater in a luxury box at the Fifth Third Ballpark—home to the Detroit Tigers’ Single A minor league affiliate—having a place for the fans to call home on opening day seemed highly unlikely.

Building and rebuilding sports stadiums is a massive undertaking. To put it in perspective, plans for the new New York Yankee stadium were announced in 2005, groundbreaking occurred in August 2006 and the first game wasn’t played until 2009, three full years later.

However, having the right team in place—from industry veterans to forensic engineers who are familiar with fire damaged buildings and an established project liaison—can drastically reduce the amount of time needed to rebuild a stadium.

In the event of a catastrophe, such as a fire, resulting damage can significantly impact a building. But in some cases, even the best construction companies have limited experience working with fire-damaged buildings.

This was the case at the Fifth Third Ballpark rebuild site. Recognizing this challenge, the hired construction company partnered with a forensic engineering firm that had the ability to identify what, if any, structural components of the stadium were salvageable. By partnering with outside experts who had the required knowledge, the construction company did not have to replace structurally sound materials, allowing them to instead focus its efforts on high-risk areas.

With so many people on a construction site—from construction crew members to company executives—effective and clear communication is extremely important. Implementing a top-down communication system that originates from a single source is thus necessary to maintain order and keep projects on track.

The benefits of such a communication system were demonstrated at The Fifth Third Ballpark rebuild when the executives at the stadium decided to alter the original design by widening walkways in their luxury boxes and expanding the size of their pro shop. This last-minute redirection could easily have resulted in a communication failure. However, since the hired construction company was working with an on-site consultant who acted as a liaison between all involved parties, updated design information was clearly communicated in a timely manner, allowing the construction company the opportunity to quickly and easily readjust to the change.

This is no isolated achievement. By building the right team, consisting of knowledgeable industry veterans, active co-partners and clear communicators, success like this can be repeated by construction companies across the country.

Steve Mortensen is an executive general adjuster for the Chubb Group of Insurance Companies.