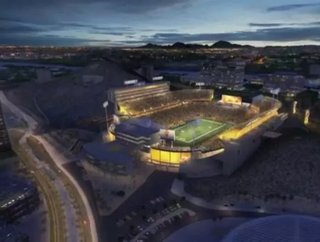 Hunt Construction Group and Sundt Construction will lead construction, while HNTB Corporation and Gould will design the renovations, which will create a horseshoe configuration at the stadium. The chosen firms fended off competition from a number of rival bidders.

The decision was announced this week by ASU Athletic Director Ray Anderson, who said it was “an important milestone in the reinvention of Sun Devil Stadium.”

Renovation plans would see the stadium’s capacity fall from 71,700 to 60,000, losing the north bleachers, installing better lower-bowl seats, improved boxes and suites and adding an enhanced video and sound system.

Hunt, which was acquired by Aecom Technlogy Group in July, previously built University of Phoenix Stadium in Glendale, Nationals Park in Washington, and is experienced in college stadium works.

Tempe-based Sundt has carried out several construction projects for ASU and the University of Arizona.