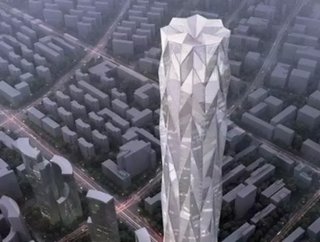 Architectural firm Smith and Gill have begun construction of a 468-metre-high crystalline skyscraper in Chengdu, China. The Greenland Tower Chengdu was...

Architectural firm Smith and Gill have begun construction of a 468-metre-high crystalline skyscraper in Chengdu, China. The Greenland Tower Chengdu was designed by Adrian Smith and Gordon Gill and is set to become the tallest building in southwestern China.

According to the architects, the faceted-glass form of the office and hotel tower was “inspired by the unique ice mountain topography around Chengdu.”

At night, inset LED lighting will highlight the edges designed to create the impression of a shimmering glacier. “Like the mountain ridges reflecting the light of the sky and the valleys reflecting light from the earth, the iconic tower will perform as a light sculpture to diffuse light from 360 degrees, creating a connection between sky and earth,” said the architectural firm in a statement.

Due to complete in 2018, the 100-storey-high skyscraper will surpass the city's current tallest buildings, the Chengdu IFS Towers, by over 200 metres.

Two smaller residential towers, standing at 115 and 147 metres, and a six-storey podium housing a shopping centre, conference and exhibition space, and a roof garden, will stand alongside the skyscraper.

Chinese property developer Greenland is behind the project. The company is also working with Adrian Smith + Gordon Gill Architecture on the 636-metre-high Wuhan Greenland Center, which is likely to become China's third-tallest building when it is completed next year.