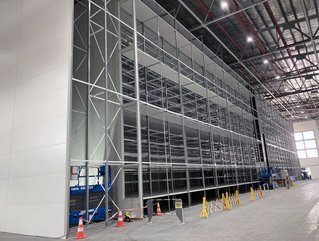 Kalera, the US-based vertical farming company, has finalised phase one construction at the Changi Logistics Centre in Singapore, with the completion of the core structure for the fully automated mega-farm.

The Orlando-headquartered company said that the multi-layer vertical farm will allow crops to grow throughout the year in any climate. As the crops will be grown in a controlled environment, that will mitigate the risk of pathogens and maximise tastes and texture appeal.

“The new indoor farm will change consumption of locally-grown and harvested greens in Singapore as we know it,” said Henner Schwarz, Chief Commercial Officer at Kalera. “We’ll be producing 500,000kgs of greens each year, which can be harvested right before consumption, resulting in higher nutritional value, less food waste and reduced CO2 emissions. We’re expecting the first harvest in the third quarter.”

The project has been made possible through the Singapore Food Agency’s (SFA) 30x30 Express Grant, which supports the local agriculture industry in producing 30% of Singapore’s nutritional needs locally and sustainably by 2030.

The grant will also help to ramp up local production of leafy vegetables through Kalera’s patented ‘Dryponics’ cultivation method, which will keep the plants alive, with roots intact, and allow consumers to harvest the plant just before consumption.

“The new farm will offer holistic support to Singapore’s long-term food security plan, which gained added significance during the COVID-19 pandemic,” said Kerstin Köhler, Country Manager, Singapore at Kalera. “By changing the way food is grown and eaten, our Singapore farm, paired with our R&D centre, will continue to drive the global urban farming revolution.”

He added that the Singapore location has seen 11 employees hired, with more planned. The company is hiring for positions in production, engineering, business development and other areas throughout the
world.

“In our 50-foot-tall indoor farm we use a fully automated advanced farming system that covers the seeding to harvesting process, has full climate control, and enables compact, modular and high-quality
plant growth,” Köhler said, adding that Kalera had acquired &ever, a leading firm in baby leaf indoor farming and that it had begun construction on the vertical farm in October 2021.

The company will open its Denver farm in March, with four additional farms in Seattle, Columbus, Ohio, Honolulu and St Paul, Minnesota under development.