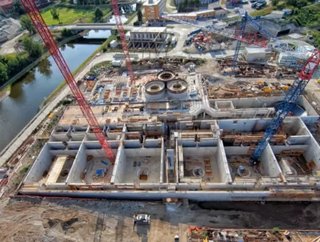 The largest construction project underway in the Czech republic is divided into two parts, which will occupy a total of 400,000m2and require 500,000 m3o...

The largest construction project underway in the Czech republic is divided into two parts, which will occupy a total of 400,000m2 and require 500,000 m3 of concrete: a complete overhaul of the existing treatment plant on the island of Cisarsky Ostrov, as well as the addition of independent treatment facilities – dubbed the “New Water Line” – which will incorporate mechanical and biological processing with an additional chemical treatment system.

The new technology introduced will bring the facilities in line with the European Council emissions guidelines for “sensitive areas.” Once improvements are completed, the plant will utilise the updated infrastructure to conduct 40 percent of all water treatment, while the new line will be responsible for the remaining 60 percent. The testing and troubleshooting process is expected to last a year before full operations can begin.

The construction of the new line is divided into four work zones: SO04, SO06, SO09, and SO10. The magnitude of these areas, not only in size but in the complexity of the operations involved, requires them to be considered as independent projects, each with its own construction manager, worksite coordination, etc.

The Czech ULMA team provisioned pre-assembled systems, thus saving assembly and erection time on-site. These systems will remain on the worksite throughout the entire construction process. Such pre-assembly services enable clients to cut costs and increase the profitability of their projects.

The sheer size of this project, not to mention the diversity of tasks required, demanded specific solutions for each of the four work zones. The technologies at work and the continual circulation of water necessitate extremely precise execution of the geometry, finishing, and the entire pouring process.

The MK System – ENKOFORM VMK for vertical applications and ENKOFORM HMK for horizontal applications – was used to build more than 30 specialised structures. Moreover, the walls, measuring more than 12 m in height, were formed in a single pour using ORMA Panel Formwork reinforced by MK Walers.

Close and constant cooperation between the customer and the ULMA team has been critical to the completion of the project in accordance with the established criteria and deadlines. Specialised technical personnel from every department were present to assist in material delivery, systems erection, and other critical tasks.