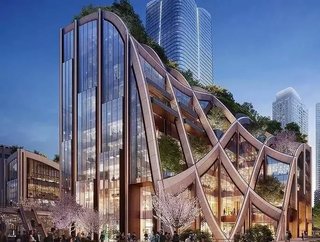 Mori Building has started work on a $5.4bn three-tower urban regeneration scheme in Tokyo, creating a city-within-a-city full of greenery set to feature...

The leading Japanese urban landscape developer has begun construction on its ‘Toranomon-Azabudai District Category 1 Urban Redevelopment Project’. The ‘Modern Urban Village’ concept will see the creation of a “unique neighbourhood that will combine the sophistication of a megalopolis with the intimacy of a small village in the heart of Tokyo”.

Designed by the UK’s Heatherwick Studio the project will be home to 3,500 residents across 1,400 units. The towers, featuring offices, a hotel, an international school, shops, restaurants and cultural facilities, will be used by 20,000 people. The total floor area of the design will be 860,400 sq m, including 213,900 sq m of office space. The city-within-a-city is expected to welcome 25-30 million visitors per year.

Thomas Heatherwick, Founder of Heatherwick Studio, commented: “It’s been very exciting working on the Toranomon-Azabudai project and much of our effort has been focused on designing the public spaces that everyone will experience when they spend time in this new area.

“As many new developments around the world can be harsh and sterile we wondered if we could provide a more human-centred alternative by integrating surprisingly intense quantities of planting and greenery.”

The project is designed to provide a safe city that will allow people to carry on living and working even in the event of a major disaster on the scale of the Great East Japan Earthquake. Mori Building's unsurpassed safety and security measures are designed to create cities to escape to, rather than flee from.Retail space was designed by Sou Fujimoto Architects of Japan.

100% of the electricity supplied to the entire neighbourhood will be from renewable sources, which will meet the targets stipulated in the RE100 international environmental initiative led by the UK's Climate Group.Mori Building will also apply for project certification under the WELL Building Standard of the International WELL Building Institute.