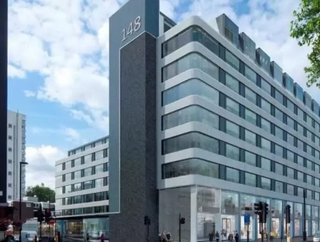 An advanced wireless alarm system from Bull Products is playing a key part in the multi-million-pound redevelopment of the Curtis Green Building, the ne...

An advanced wireless alarm system from Bull Products is playing a key part in the multi-million-pound redevelopment of the Curtis Green Building, the new home for Scotland Yard on the Victoria Embankment, London.

The 1937 building designed by architect William Curtis Green is a neo-classical design and the move to this building is part of the Met’s drive to reduce operating costs.  In the refurbishment, architects AHMM have designed an extension to the rear of the building, a glazed entrance pavilion, roof top pavilion and an ‘iconic blue line beacon’ to the open plan offices at the top of the building.  The famous rotating sign is also moving to the new building and re-named Scotland Yard.

Main contractors Royal BAM Group have been working on the project for nearly two years and the completion date is Autumn 2016. The refurbishment involved some demolition and soft strip of the interior and in the early stages of the project, the alarms fitted were smaller sounder units.  It wasn’t long before a more sophisticated and reliable alarm system was required to ensure the health and safety of the construction workforce.

The Cygnus wireless alarm system from Bull Products was selected for the job, and a total of 30 fire alarms and first aid alerts are installed across all the floors, each wirelessly linked to two main Cygnus control units, one in the extension building and one in the security section of the site office.

Andy Lee, Site Manager for BAM is very impressed with the performance of the alarm system, “This Cygnus system has been immensely valuable to us, covering such a large area of the building.

The system’s dual functionality for both fire and first aid has been an important element in its choice.”  He continued, “Crucially, these alarms can be heard over the sound of demolition work and so as the project developed the Cygnus wireless system became a necessity.”

Bull Products’ Cygnus wireless alarm system can link as many as 480 alarm and detector units in different zones on a construction site, and individual units can be fire alarm call points, first aid alerts, combined call point and smoke detectors or heat detectors.

Intended purely for use on construction sites, the CE marked Cygnus system has been specifically designed for use in dense concrete and steel structured buildings and areas where there are many other radio frequencies in operation, and so particular attention has been given to achieving an impressive connection range.

Where there are multiple sites within range of each other, the Cygnus system has been designed to operate on different site addresses in order to keep each system separate and free from interference.

A major feature of the Cygnus system is the optional control panel which provides a very sophisticated capability with an event log function which records any events such as an alarm activation, low battery warning, and signal faults, all of which can be viewed if necessary in the history folder held on the panel.  The system also has the ability to test all units and has an evacuate function which will act as a call point to the rest of the alarm units.

Each unit in the system can provide the panel with information at regular intervals.  This explicit information confirms the unit is still present and what the battery status of each device is.  Known as the ‘heart beat’ this message is monitored by the control panel where fitted and if the ‘heart beat’ is not heard for several intervals, the control panel logs a full status for that unit. A PIR option is now available on any of the modules which can detect an intruder and alert off-site personnel for added safety protection.