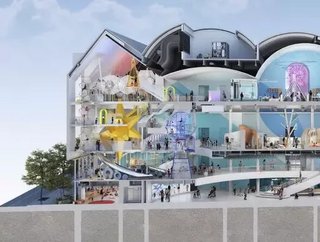 Snøhetta and the El Paso Children’s Museum leadership unveiled the final designs of the new light-filled, lofty and playful structure, during a ground-breaking ceremony held at the museum’s location at 201 W. Main in downtown El Paso.

The architect won the design for the museum after a two-year process, following meetings with the local community, multiple presentations and a public vote.

The building’s geometries immediately set it apart in the city’s skyline, with its rectilinear base wrapped in glass, providing interior views to entice pedestrians to stop inside the public lobby, and is topped by a rippling succession of barrel vaults which rise to a ‘cloud-like’ crown, the architect explains.

Furthermore, Snøhetta says that the spaces within the museum will act as a learning tool. These include a terraced ‘discovery garden’, a grove of trees, and a ‘cooling mist’ playground.

“The architecture reveals itself as a cloud, floating above the desert connecting all people in this important place, young and old alike,” the architect firm says.

Snøhetta’s design considers how the museum itself can become a learning tool. With spaces and exhibitions that inspire the imagination of both children and adults alike, the museum celebrates the unique culture and geography of El Paso while providing barrier-free access to educational opportunities, it emphasises.

The unveiling is the latest milestone for El Paso’s first purpose-built children’s museum, a special project of the El Paso Community Foundation, the City of El Paso and other community stakeholders. The museum aims to become a civic classroom and energy point for the region’s families, designed to maximise open-ended and imaginative play and exploration, Snøhetta adds. It has been designed to bring value to all youth in the surrounding region, and to complement the nearby children’s museum in the Mexican city of Juarez.

It is located within the heart of El Paso’s Downtown Arts district, close to the vibrant San Jacinto plaza, and less than one kilometre from El Paso del Norte, a major border-crossing station. To the north, the site is bounded by the Union Pacific Railroad, one of two major transcontinental freight lines in the western United States.

Snøhetta has partnered with local El Paso architects Exigo and is working with Gyroscope who is designing the exhibitions for the museum.