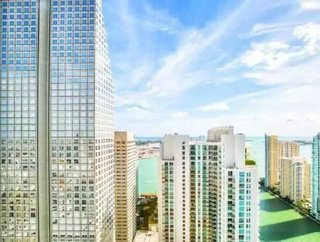 Designed by Gary Edward Handel and Associates and Bermello Ajamil & Partners, the Four Seasons Tower was completed in 2003 at a cost of $280,000,000, becoming the tallest building within Miami.

Originally built at a cost of $180 million, the Southeast Financial Center was awarded LEED Gold in 2010.

At 765ft, the tower incorporates 53 floors for office use, but the first and second floors house retail stores, alongside the Miami City Club and parking.

Designed by architect Arquitectonia, the Marquis Tower is 679ft.

Unlike the majority of mixed use skyscrapers within Miami, 900 Biscayne Bay has become a residential build, incorporating 800 parking spaces.

Designed by Key International and architect Revuelta Vega Leon, the 631ft tower comprises of three sections, all of which were completed by 2010.

Completing in 2008, the mixed use Infinity at Brickell tower is 630ft, incorporating over 50 floors. The tower was built by architects Adache Group and Borges and Associates.

Completed in 1987, the Miami Tower was designed by architects Pei Cobb Freed and Partners. At 625ft, the tower comprises of 47 floors.

One of the most iconic towers within Miami, the build projects different colours to celebrate the holidays and seasons.

Completed in 2007, the Plaza on Brickell comprises of a retail centre and two towers within its build.