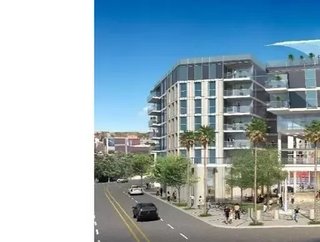 Walker & Dunlop arranges $138m loan for The Rise Hollywood which is targeting a Spring launch, among other projects...

Walker & Dunlop, Inc. has arranged $138 million bridge financing for the construction of The Rise Hollywood, a 369-unit 7-story mid-rise apartment project in Los Angeles - one of a number of recent financing deals across the US.

Located in the heart of Hollywood's Entertainment District, the property features a highly walkable location and immediate access to amenities and wide range of employers, and is directly opposite Academy Square, where 350,000 square feet of Class A office space is fully leased to Netflix.

Occupying a 2.15-acre site, the project will comprise five seven-story buildings surrounding an amenity deck. On completion in the Spring, the elevated recreation deck will include an expansive pool and spa, fire pits, barbecue areas, a rooftop deck with an outdoor movie screen, and modern, open-concept floor plans.

The project is owned, and was developed by, Rescore Property Corp. Rescore is a private REIT managed by Encore Capital Management, manager of three fund vehicles with over $3 billion in assets under management and whose principals are Art Falcone and Tony Avila. Encore, based in Boca Raton, Florida, has 20,000 residential units under ownership and/or development.

Hollywood has become one of L.A.’s fastest-growing office markets, attracting more than $5 billion investment since 2000. Ground was recently broken on the Hollywood Arts Collective, an affordable housing and mixed-use art center valued at $120 million, according to project developers.

Other deals include $91 million in financing for the acquisition of the LEED-certified Bank of America Tower in Jackonsville and 65 East State Street in Columbus. Both properties have undergone several millions of dollars in capital improvements, positioning them as the premier office towers in their respective locations.

Q4 2020 revenues totalled $349.7 million, up 61% year-on-year, and its Drive to '25 strategy aims to position the firm as the premier commercial real estate finance company in the United States.