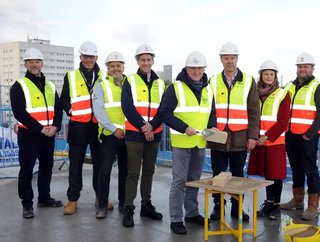 Winvic Construction and client PATRIZIA have topped out the first roof at a build-to-rent (BTR) scheme in Edgbaston and started the façade installation programme which will continue until Q4 2023.

Councillor Ian Ward, Leader of Birmingham City Council, was invited to the celebratory ceremony at the site located adjacent to Edgbaston Stadium and recently laid a brick on the fifth-floor roof.

The 375-apartment scheme – which Winvic began constructing in February – comprises four concrete-framed stair and lift cores, with blocks reaching to five, six, seven, eight, 13 and 18 storeys. Undercroft car parking and bicycle storage, a landscaped podium deck, a residents’ rooftop terrace, a gym and five commercial units on the ground floor, totalling approximately 15,000sq ft, will be created as part of the project.

Winvic’s contract also includes the full fit out of the development, which contains 189 one-bedroom, 169 two-bedroom and 17 three-bedroom apartments, with handover scheduled for Q3 2023.

Fit out to the entrance, ground floor plant, amenity and storage areas begins in the New Year and Winvic will be fitting out the apartments from next Spring. At the end of January, the drainage and incoming utility services works will be complete, and lighting installation and landscaping works, featuring almost 3,000 trees and shrubs, will begin towards the end of next year.

Richard Scutt, Development Director at PATRIZIA, said Birmingham has one of the largest private rental sectors outside London. It is prioritising wellness of residents within the design by targeting Fitwel certification, an international standard of rating wellbeing in a building. The building will also achieve a Homes Quality Mark certification, making it one of the first BTR developments to obtain this accreditation, attesting to high standards of build, running costs, health and wellbeing, and sustainability.

Councillor Ward said the development caters for Birmingham’s wider demographic that wish to live in a high-end apartment close to the city, yet in the leafy setting of Edgbaston and next to Cannon Hill Park.

Winvic is continuing with the construction of a 56,500sq ft entrance plaza, reconfiguration of the existing car park and the creation 229 new car parking spaces into next year. Phase 1 of the WCCC works was completed in March 2021 and phase 2 is on track for handover in March 2022, in readiness for the Birmingham 2022 Commonwealth Games.

Elsewhere in the Midlands, work has begun on Cotswolds Designer Outlet, a new designer shopping village, close to the M5 near Worcestershire, according to Birmingham Live. The first shops are due to open next autumn, and on site will be restaurants, shops and one of the largest garden centres in the country. Realm has been appointed to head up the leasing.