Work presses ahead on £40m Manchester tower after 10 year wait 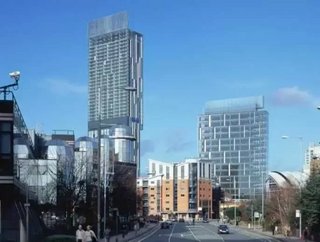 Work on a new &pound;40m tower in Manchester has officially begun, 10 years after plans were approved by the local council. The Axis Tower, to be built...

Work on a new £40m tower in Manchester has officially begun, 10 years after plans were approved by the local council.

The Axis Tower, to be built in the Manchester city centre, will feature bronzed aluminium panels and a glass façade system and will contain over 170 flats.

Gareth Russell, of Russells Construction, admits that the project will be challenging, but is excited to finally begin working on the build.

“Building a 28-storey tower on a small site on a canal bank in the middle of the city is no mean feat, but we have developed a wealth of experience of this type of constrained high rise build with several recent city centre hotel schemes, and have put together an expert team to devise and implement the solutions necessary to deliver Axis,” he said.

“There has been a lot of complicated planning and design to get this stage, so it’s great to get started.”