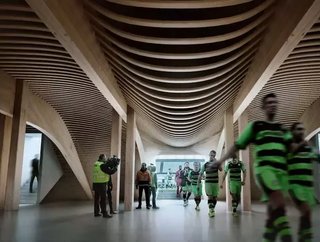 Zaha Hadid Architects (ZHA) has won permission for the world’s first timber football stadium in Gloucestershire at the second attempt.

The Eco Park will be the new home for Forest Green Rovers; the 5,000-capacity stadium was finally approved by Stroud District Council’s planning department last week.

The stadium is part of the £100mn Eco Park development close to the M5 in Gloucestershire masterminded by the League Two football club’s chairman Dale Vince. The stadium project will include parking and two pitches, one of which will be multi-purpose and available to the local community.

Back in June, the same planning committee refused the plans, citing noise, traffic and impact on the environment which led to the design proposals being amended.

The changes include swapping one grass pitch to an all-weather pitch with access to local clubs, a revised landscaping strategy, increased matchday transport and addressing issues regarding noise.

Following the appointment of Zaha Hadid Architects in 2016, Vince commented: ‘The really standout thing about this stadium is that it’s going to be entirely made of wood - the first time that will have been done anywhere in the world.

‘The importance of using wood is not only that it’s a naturally occurring material, it has very low carbon content - about as low as it gets for a building material.

‘And when you bear in mind that around three-quarters of the lifetime carbon impact of any stadium comes from its building materials, you can see why that’s so important, and it’s why our new stadium will have the lowest carbon content of any stadium in the world.’