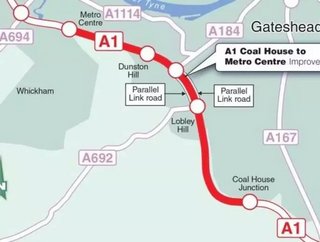 Balfour Beatty has been awarded a &pound;43.9 million contract by the Highways Agency to design and build the A1 Coal House to Metro Centre improvement...

Balfour Beatty has been awarded a £43.9 million contract by the Highways Agency to design and build the A1 Coal House to Metro Centre improvement scheme in Gateshead.

Works will commence on site in late summer and are due for completion in early 2016.

Balfour will build new parallel link roads between the Lobley Hill and Gateshead Quay (A184) junctions and increase lane capacity on the A1 main line from two to three lanes in each direction from the four-mile Metro Centre to Coal House junction.

Balfour said it would use its patented ‘King Sheet Piling System’ during widening works to reduce the pile area and driving depth to reduce the overall construction programme.

Traffic management plans will allow for daytime installation to reduce noise from works during the night.

The existing merge and diverge arrangements will be reconfigured with the widened A1 carriageway requiring replacing and/or repositioning of fencing, road restraint systems, drainage, traffic signs, road markings, street lighting and technology structures.

Landscaping and accommodation works on the trunk road and local road networks will retain the existing cutting and embankment slopes.

The hardening of the central reserve between Coal House and Lobley Hill will maximise the availability for two lanes of traffic in each direction throughout the duration of the contract, minimising disruption for road users.

Balfour Beatty said it would take a sustainable approach to the works including the use of excavated material as part of the reinforced earth structure and verge fill, with existing road pavement planing being reused as the sub-base within the footway construction.

Other excess materials will be taken off site and recycled on construction projects across the north east of England.

The project will employ more than 200 people at construction peak including three apprentices and two graduates and will be proactive in seeking opportunities for local small to medium enterprises throughout.