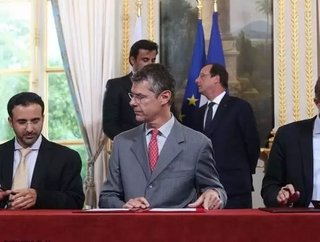 A consortium consisting of QDVC (a 51 percent Qatari Diar, 49 percent Vinci Construction Grands Projets subsidiary) and Alstom has been awarded a $2.7bn...

A consortium consisting of QDVC (a 51 percent Qatari Diar, 49 percent Vinci Construction Grands Projets subsidiary) and Alstom has been awarded a $2.7bn contract for the last phase of the Lusail Light Rail Transit (LRT) project in Qatar by Qatar Railways.

The new contract was signed in Paris on 23 June 2014 at a ceremony attended by François Hollande, President of the French Republic, and His Highness Sheikh Tamim Bin Hamad Al Thani, Emir of Qatar, during his official visit to France.

Alstom’s share of the works is worth just over $1bn, including delivery of 35 trains along with power supply equipment, signalling, control systems and trackworks, while that of QDVC comprises construction of 25 stations and a depot, architectural and electro-mechanical works packages and integrated project management.

Alstom said the 35 Citadis trams for Lusail will be 32 metres long and will offer high-end comfort to passengers, thanks to enhanced communications with passenger information and security systems both at stations and on-board.

QDVC won the first works phases for the light rail transit system (LRT) in Lusail, Qatar, in 2007 and 2011.

The light rail system is scheduled to begin operating in 2018 (yellow line) and 2020 (green, red and purple lines).

The city of Lusail, a new urban development with a population of 200,000 north of Doha, the capital of Qatar, will welcome up to 450,000 people per day. Sustainable development was a primary criterion in planning the new city. From the start, the design included the creation of a public transport system to limit greenhouse gas emissions.

QDVC completed the civil engineering works on the first phases of the infrastructure (7 km of tunnels, 7 underground and 4 above-ground stations, as well as an access viaduct to the depot) and is currently building the Pearl station, which will connect the Lusail light rail with the Doha metro system, also under construction.

In seven years, VINCI Construction Grands Projets has become, through QDVC, a major construction player in Qatar. After handing over the country's largest wastewater pumping station, the company is currently working on several projects: a new motorway on the outskirts of Doha (the New Orbital Highway), the Doha metro (southern works package of the red line) and the underground car park and landscaped gardens at the Sheraton hotel in the West Bay business district.