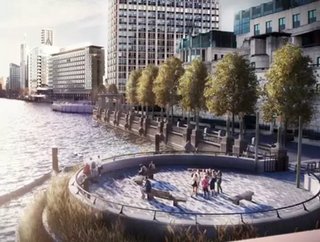 New images that offer a vision of how the River Thames will look in the future have been released by Tideway, the company building the Thames Tideway Tu...

New images that offer a vision of how the River Thames will look in the future have been released by Tideway, the company building the Thames Tideway Tunnel.

The images depict seven new public spaces that are to be built as part of works to build the tunnel, more commonly referred to as London’s ‘super sewer’.

The 25km super sewer is a vital infrastructure project that will modernise London’s ageing sewage system and dramatically improve the environment by preventing millions of tonnes of sewage overflowing into the river each year. But for Tideway, it’s more than just cleaning up the river.

Sir Joseph Bazalgette, who designed London’s original sewer system over 150 years ago, built out onto the river creating the Victoria, Albert and Chelsea Embankments. Tideway will be honouring that legacy by also building out onto the river, creating seven new landscaped areas which will include sites at Chelsea, Albert, Victoria and Putney Embankments, as well as at Blackfriars Bridge, King Edward Memorial Park and Heathwall Pumping Station.

Parts of the new spaces at Victoria and Chelsea Embankments and at King Edward Memorial Park will be ‘floodable’ at high tides, giving Londoners the first opportunity of its kind to dip their toe in what will be a cleaner River Thames.

Tideway’s designers have worked closely with artists at each location to develop a trail of contemporary artwork that explore themes from the River’s history and its significant role in the city’s development.

The new public spaces will follow the example set by Bazalgette, as demonstrated on the embankment river walls which includes the now iconic sturgeon lamp posts.

Tim Heading, Architecture and Landscape Lead, Arup Atkins Joint Venture, said: “A healthy River Thames plays an essential role in the wellbeing and prosperity of London and its people. The Thames Tideway Tunnel will help transform the river and we are very pleased that the valuable experience, expertise and approach of the combined Arup and Atkins teams is being utilised to promote a positive change in the relationship that Londoners and visitors have with the Thames.”

Harbinder Birdi, Hawkins/Brown Architects, said: “We are delighted to be part of this once-in-a-lifetime opportunity to work alongside engineers and artists in re-imagining London’s relationship with the River Thames. In developing the designs for these ambitious new public spaces as architect for the central section, we have responded to the unique characteristics of each site; from the natural, contemplative context of Chelsea Embankment to the prominent position of Blackfriars Bridge, where the landscape tells the story of the lost river Fleet while opening up new views of St Paul’s. The sites are connected by a common aim: to bring people closer to the river.”

Steve Bell, Weston Williamson and Partners, said: “It is a tremendous privilege to be part of a project that is key to the rehabilitation of the River Thames, and to create new public spaces at the river’s edge. The team, comprising Architects, Contractors, Engineers and Artists, are working closely together to sensitively manage the impacts of the massive below-ground engineering on existing communities and physical context and deliver memorable new public realm.”

Roger Bailey, Tideway’s Chief Technical Officer, said: “When Sir Joseph Bazalgette unveiled his vision for London’s sewer system more than 150 years ago, he changed the look and character of the city with the creation of the Chelsea, Victoria and Albert Embankments.

“Similarly, the construction of London’s new super sewer will create three acres of new public space designed to reconnect the capital’s residents and visitors with the River Thames. In keeping with Bazalgette’s legacy, the new public spaces will be designed to enhance the environment and provide a lasting legacy. Our ambition is to celebrate the River Thames as the heart of London.”