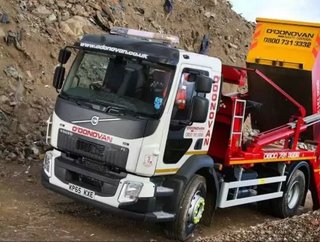 A few years ago, the CIOB reported that women account for just 10 per cent of the construction workforce - a low, yet unsurprising number. Personally, I...

A few years ago, the CIOB reported that women account for just 10 per cent of the construction workforce - a low, yet unsurprising number. Personally, I hadn’t originally planned on a career in construction waste industry, but when my father died unexpectedly in 1985, I, along with my siblings had to step up to continue the legacy he had created - I was only 17 years old.

In the 1980s, being a woman running a business was enough of a challenge in itself, but the fact that I was a woman and operating in construction was a complete anomaly. I often found that I wasn’t taken seriously, with many clients demanding to speak to a male senior member of staff whenever I answered the phone. Rather than let it affect me, I began handing phone calls to one of the staff members I had personally trained, confident that I was delegating effectively.

Especially when starting out, many of the men in the company presumed I wasn’t savvy about certain regulations or equipment. I would ultimately surprise them with my knowledge of safe working practices, which I have strived to enforce during my time here. A key achievement for me was when I took over the safety and training of O’Donovan’s HGV drivers, even creating my own driver Certificate of Professional Competence course - one of the first to be tailored specifically to the exact training needs of drivers working across the waste industry.

In the past 30 years alone, London has become a much more congested place and there have unfortunately been a high number of collisions across the capital between HGVs and cyclists or pedestrians. With a fleet of 85 lorries, which are out on London’s roads six, sometimes even seven, days a week, the safety of vulnerable road users, as well our own drivers, is a priority for us. The time I have committed to improving safety across the sector has seen me collaborate with CLOCS, the Construction Logistics and Cyclist Safety organisation, on the design of innovative lorries and safety features which are changing the face of transport policies across the UK. Further to our work in safety, we are proud to have achieved Fleet Operator Recognition Scheme (FORS) Gold accreditation for the fifth consecutive year.

Having experienced the obstacles women in this industry face first hand, I try to support and inspire other women to follow in my footsteps and enter the industry on the front foot. I endeavour to employ talented female team members - my management team alone is comprised of female compliance director, operations director, executive assistant and business development manager to name a few. But I didn’t hire them for gender diversity’s sake – they are talented and quite brilliant at their respective jobs.

Overall, when it comes to gender, I have personally never viewed it as a reason to not pursue a dream and I have worked hard at establishing my place in the industry over the past few decades. I am confident in saying that my knowledge and experience does match, if not exceeds, the majority of my male peers. When I entered the business, the waste industry was becoming increasingly competitive, and I had to steer O’Donovan through two recessions, whilst avoiding making a single member of staff redundant and continuing to increase turnover. Balancing this, along with my own family and employee’s finances, I came out the other side in the knowledge that I was more than capable of being a successful female director in a male dominated industry.