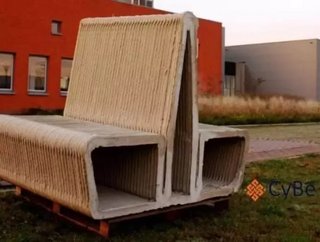 The extraordinary concept of 3D concrete printing could become reality in 2016, thanks to Amsterdam-based organisation CyBe. As reported by 3dprint.com...

The extraordinary concept of 3D concrete printing could become reality in 2016, thanks to Amsterdam-based organisation CyBe. As reported by 3dprint.com.

Berry Hendriks, the Managing Director, began developing his concrete printing technology in late 2013, perfecting it last year. While the CyBe 3D printable mortar is due to be available to businesses as early as January 2016, the ProTo 3DP Concrete 3D Printer is yet to be certified with the EU – and without certification, the product can’t be launched.

However, according to the fascinating production images and videos shown on CyBe’s website and YouTube channel, the technology appears to be sound. The printed concrete is fast-drying, and because of this it can be formed into load-bearing structures – without the need for traditional supports – within an hour. Similarly impressive is the fact that 3D-printed concrete eliminates concrete waste and cuts C02 emissions by up to 75 percent.

If products are printed at the quickest rate, the structure will retain the layered texture typical of 3D printing, but there is a smoothed-down option depending on aesthetic requirements. As hard as Hendriks and his team have worked on the technological development of the printer, he has stated that: “Educating our clients on how to use the 3D printers in their business processes to experience the benefits” is just as important. After all, constructions companies can only effectively use a product if they understand it.

As was Hendriks’ original intention, CyBe 3D printing could revolutionise the construction industry, provided it gets the necessary go-ahead.