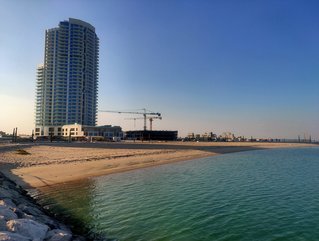 DAMAC Properties has said its Burj DAMAC Seaviews Tower in the Qatari city of Lusail is nearing completion, with snagging works expected to be completed in December of this year.

In a statement, the Dubai-based developer said that the 33-storey tower will comprise of luxury furnished apartments and beach front townhouses. Located 15-kilometres north of Doha City Centre, Lusail is Qatar’s newest city. Situated north of the West Bay Lagoon, the city stretches out over an area of 35 kilometres and can accommodate up to 250,000 people.

It contains marinas, residential areas, island resorts, commercial districts, luxury shopping and leisure facilities, including two golf courses and an entertainment district. The Marina District, which is located at the southern end of Lusail, is close to the West Bay area, and aims to become one of the most attractive and appealing parts of the city.

“We are thrilled to be nearing completion of this project with its prime location,” Mohammed Tahaineh, General Manager of DAMAC Properties said. “The name Seaviews is particularly fitting as all units will have a scenic waterfront view of the Arabian Gulf, where residents can enjoy relaxing walks on the beach right on the doorsteps of their homes.”

Burj DAMAC will come equipped with ‘elegantly designed interiors, where residents can reside in the lap of luxury’, the developer added.

Once completed, the tower will add to DAMAC’s growing portfolio of projects in Qatar including the Burj DAMAC Marina, which is also located in Lusail. The company currently has properties in the UAE, Saudi Arabia, Qatar, Jordan, Lebanon, Iraq, the Maldives, Canada, the United States, and the United Kingdom.

It has also collaborated with a number of international lifestyle and fashion brands, including The Trump Organisation, Versace, Cavalli, Just Cavalli, de GRISOGONO, Zuhair Murad, Paramount Hotels and Resorts, and more.