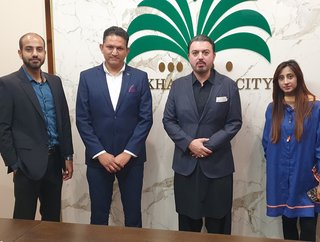 Shaariq.com, an end-to-end real estate platform from the Dubai-based technology firm, Vision Tech Solutions, has signed an exclusive Memorandum of Understanding with the Pakistan-headquartered JK&S Developers for the facilitation of sales in the developer’s D.I. Khan New City in Saiduwali, Paharpur.

In a statement, Shaariq.com said that it would leverage its enterprise blockchain capabilities to ensure secure, transparent, and seamless transactions for the hybrid development, which is being built in close proximity to Punjab, Khyber Pakhtunkhwa, Islamabad, and Baluchistan.

The development covers an area of 4.1 million square meters and is valued at US$233 million, making it one of the most ambitious projects of its kind in Pakistan. JK&S Developers is the real estate development arm of Saif Group, the Pakistani conglomerate based in Islamabad, Pakistan’s capital.

“Shaariq.com ventured into Pakistan with a grand vision: Enhancing transactional efficiency and reducing the trust deficit by leveraging cutting-edge technologies such as blockchain. D.I. Khan New City is the ideal avenue to turn that vision into reality. We are determined to make this project an archetype of Pakistan’s real estate excellence while reinforcing our competitive edge in tech-enabled services,” said Rajab Ali Virani, CEO of Vision Tech.

Rajab stated that his optimism stems from the proposed plan of D.I. Khan New City. The gated community will include state-of-the-art healthcare and educational facilities, in addition to unique value propositions such as underground utilities, a safari park, a mall, an adventure complex, farmhouses, and a grand mosque.

As a result, the hybrid project — a mix of residential and commercial projects — will have green, open spaces across 50% of the total area. The entire project will have round-the-clock security and surveillance, making it ideal for families and corporates alike, he added.

The involvement of Shaariq.com will see D.I. Khan New City become an early mover in adopting blockchain at an enterprise level, Virani said.

Shaariq.com will create a digital twin of the project in the metaverse to enable efficient urban planning and optimise the delivery of public services such as healthcare and groceries. NFT-linked transactions on the blockchain will bring greater security, transferability, and future readiness.

“The Saif Group has nearly a hundred years of multi-industrial pedigree in Pakistan. At every juncture, we have exemplified the latest innovations of the time. D.I. Khan New City is a totem of our future-proof strategy and a legacy of our people-centric worldview. The MoU with Shaariq.com complements both these priorities,” stated Jehangir Saifullah Khan, Chairman of JK&S Developers.

He added that the technology will not only be able to bridge the existing digital divide but also pave the way for the rationalisation of the real estate industry.

Virani stated that Shaariq.com’s strategic partnership with a leading developer, within a year of its entry into Pakistan, reflects its disruptive potential and firmness of purpose. He added that Vision Tech is planning an expansion into African countries, where, through Shaariq.com, it intends to digitalise land records with the support of local authorities.