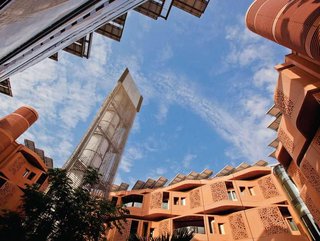 The transaction was first announced in December 2021 by Sheikh Mohamed bin Zayed Al Nahyan, President of the United Arab Emirates, and it will see three of Abu Dhabi’s most prominent companies combining their efforts to rapidly grow Masdar on a global scale, under an expanded mandate covering renewable power, green hydrogen, and other enabling clean energy technologies.

Under the new partnership, Masdar will become a national clean energy champion for the UAE and has an ambitious target of growing to at least 100GW of renewable energy capacity globally by 2030. The largest share of this capacity will come from wind and solar technologies.

Beyond its initial goals, the company said that it aims to develop in excess of 200 GW of renewable energy, reinforcing its position as a world leader in the renewable energy sector. In addition, Masdar’s new green hydrogen business will rapidly scale up and target an annual green hydrogen production capacity of up to 1 million tonnes by 2030, equivalent to saving more than six million tons of CO2 emissions.

Green hydrogen, which is produced using water and renewable energy, is fast emerging as an important carbon-free fuel for the decarbonisation of hard to abate sectors such as heavy industry. It is expected to play a critical role in meeting the world’s net zero aspirations, with Masdar and the UAE set to take a leading role in the hydrogen economy.

Dr Sultan Ahmed Al Jaber, Minister of Industry and Advanced Technology, Managing Director and Group CEO of ADNOC, and Chairman of Masdar said: “As the founding CEO of Masdar, I am excited to see Abu Dhabi’s energy leaders coming together to take Masdar to the next level. The Masdar clean energy powerhouse will unlock a new chapter of growth, development, and opportunity for renewable energy and green hydrogen projects, both in the UAE and worldwide.

“As the UAE delivers on its Net Zero by 2050 strategic initiative and prepares to host COP28 next year, by leveraging the skills and experience of its partners, Masdar will build on its rich legacy as a pioneer in the renewable energy sector, accelerate the delivery of world-scale projects, and help meet the world’s growing demand for clean energy. For ADNOC, our participation in Masdar is an important pillar in our strategy to expand clean energy production, unlock new opportunities for industrial development and drive decarbonisation.”

TAQA will take a leading role in Masdar’s renewable business with a 43% shareholding, while Mubadala will retain 33% and ADNOC will hold 24%. ADNOC is taking the leading role in Masdar’s green hydrogen business with a 43% stake, Mubadala holding 33%, and TAQA 24%. The partnership sets out to develop Masdar into a global clean energy powerhouse that consolidates the renewable energy and green hydrogen efforts of TAQA, Mubadala, and ADNOC under a refreshed single Masdar brand.

TAQA paid US$1.02 billion in cash for its stake, the statement added.

The new Masdar will target growth opportunities around the world including in the US, MENA, CIS, APAC, and key European countries as well as playing a central role in providing the clean energy needed for the UAE to achieve its own 2050 net zero target. Growth is expected to come from a combination of new and existing projects, as well as acquisitions.

Khaldoon Khalifa Al Mubarak, Managing Director and Group Chief Executive Officer of Mubadala said: “We established Masdar 16 years ago based on an early conviction that building capabilities and supporting innovation and scale across the clean energy spectrum would be transformative for the nation and an investment in future generations. Today, Masdar is one of the world’s fastest-growing renewable energy companies. This significant milestone helps unlock synergies in Masdar’s continued growth journey and the UAE’s global energy leadership.

“Global cooperation is vital to achieving the critical scale in clean energy sources, and we are committed to leveraging our partnerships to enable Masdar to deliver a broader global impact.”

Alongside the completion of the transaction, a new Board of Directors has been appointed for Masdar’s renewable business with Dr Sultan Ahmed Al Jaber reappointed as Chairman. The board members include:

As part of the deal, TAQA will offer to contribute its ownership interests in future Abu Dhabi renewable power projects to Masdar. Masdar City, Abu Dhabi’s flagship sustainable urban development, will continue to remain under Mubadala’s ownership as the sole shareholder.

Mohamed Hassan Alsuwaidi, Chairman of TAQA said: “This transaction marks the start of Masdar’s journey towards becoming one of the largest clean energy companies in the world, backed by three of the UAE’s energy and investment pacesetters. Over the next decade, Masdar will rapidly expand its renewable energy and green hydrogen investments to accelerate decarbonisation.

“Last year, TAQA committed to a renewable energy share of 30% of its total power generation capacity by 2030. Our stake in Masdar is a key part of delivering on this target, while supporting the UAE’s ambition to cut greenhouse gas emissions and be a driving force in the global energy transition. Today, we stand as one of the largest integrated utility players in Europe, the Middle East, and Africa. Tomorrow, we will be known as a pan-regional low carbon power and water champion,” he concluded.