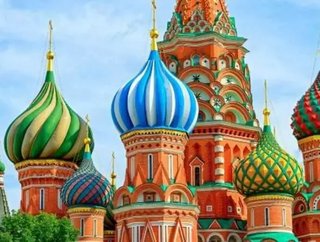 Since the turn of the industrial revolution, buildings have been known to be neutral colours, appealing to a multitude of buyers and consumers. However...

Since the turn of the industrial revolution, buildings have been known to be neutral colours, appealing to a multitude of buyers and consumers. However, we look at five brightly coloured builds which go against this trend, becoming popular with locals and tourists, boosting local economies and celebrating unique architecture.

Bright, colourful Victorian houses currently line Haight Street in San Francisco. The area was once part of the sixties hippie scene, where houses were affordable and not vastly overpopulated within the post-war era.

Prior to their development, the site incorporated farms and land, which was connected to the rest of San Francisco by cable car.

Built in the 16th century and situated in the red square lies St Basil’s Cathedral, constructed during the reign of Tsar Ivan IV. The cathedral replaces the Trinity Church, previously situated on site.

Now a museum, the cathedral incorporates several colours which have been restored from the 17th century onwards.

Constructed with stone, brick and an internal wooden supporting frame, the build has been expanded throughout the years, becoming a UNESCO World Heritage Site in 1990.

Although affected by unpredictable weather conditions, the homes within Cinque Terre display an array of bright colours since the 1970s, incorporating several villages in the area.

Part of the UNESCO World Heritage Site since 1997, the homes overlook the sea and have become popular with tourists who wish for seclusion and privacy.

Constructed with locally sourced materials, La Boca in Argentina is popular with tourists due to its multi-coloured builds and cultural, lively music scene. The area is still home to many who used to work in shipyards in the region.

A mix of European nationalities now call La Boca home, housing theatres and other entertainment venues for tourists and locals to enjoy.

Renowned as one of Antoni Gaudi’s most famous works, the Casa Batlló was originally renovated in the end of the 19th century and is named after the Batlló family who selected Gaudi to undertake the work. The home was completely renovated to encompass extra floors and enable increased light to enter the building.

Constructed with glass, sandstone and various stones, tiles have been utilised in the construction of mosaic pieces, eliminating the notion of straight, rigid structures within the build. The building showcases an array of colours, with many of interior and exterior creations reflecting the skeletal appearance of animals, such as the debated spine of a dragon within the roof, created with the use of different coloured tiles.

The building has since become a UNESCO World Heritage site.