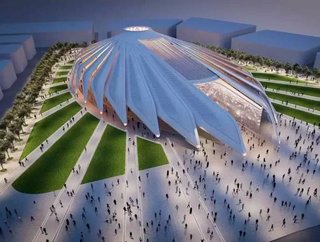 Arabtec Construction has been awarded a contract of around AED 353m ($96) to work on the construction of the UAE Pavilion ahead of Expo 2020 Dubai. Abu...

Arabtec Construction has been awarded a contract of around AED 353m ($96) to work on the construction of the UAE Pavilion ahead of Expo 2020 Dubai.

Abu Dhabi National Media Council awarded the contract, which will see the construction of a pavilion that will sit at the heart of the 500-acre exhibition area.

Upon completion, the Calatrava-designed UAE Pavilion will be approximately 15,000 square meters (over 161,000 square feet) and will include numerous exhibition areas, an auditorium, food and beverage outlets and VIP lounges.

The overall design of the pavilion, is inspired by a falcon in flight.

Commenting on the contract award, Hamish Tyrwhitt, group chief executive officer of Arabtec Construction, said: “The UAE Pavilion project marks yet another achievement on our roadmap to a sustainable and successful future.

“It highlights our strategic focus on the UAE as our core market, and also demonstrates our commitment to building our future through the development of social infrastructure, in addition to instilling a performance-based culture within our organisation,” he added.

Construction on the pavilion will begin later this month (July 2017) and is expected to be completed in Q4 2019.

The contract comes as part of the announcement earlier in the year that there will be 47 construction contracts for tender to local and foreign companies, adding up to a total value of AED 11b ($3bn).

This follows on from construction contracts adding up to a total of AED2bn in 2016.

The UAE Pavilion was designed by Santiago Calatrava, a Spanish architect, having submitted 11 concepts along with nine of the world’s most celebrated architectural firms.

“The proposed design of the UAE Pavilion captures the story we want to tell the world about our nation,” said UAE Minister of State and National Media Council Chairman H.E. Dr Sultan Ahmed Al Jaber.

“Our late founding father His Highness Sheikh Zayed bin Sultan Al Nahyan used falconry expeditions to forge connections between tribes and to create a distinct national identity which ultimately led to the founding of the United Arab Emirates. Now, the falcon design will symbolize how we are connecting the UAE to the minds of the world and how as a global community we can soar to new heights through partnership and cooperation.”

Arabtec Construction, founded in 1975, is currently working on a number of construction projects across the UAE, including the Abu Dhabi Plaza, Msheireb Downton Regeneration Porject and Tiara Towers.