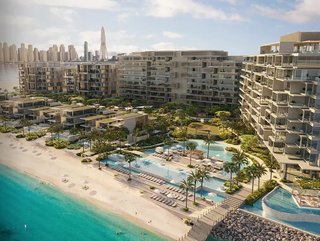 Select Group, the Dubai-based real estate developer, has said that it has awarded construction contracts worth more than US$816.77 million, equivalent to over 10 million square feet of development.

The awards come after a record year in development launches and sales. The construction contracts are for each of its recently launched projects to ensure its commitment to delivering them in a timely manner, while still surpassing stakeholder expectations.

In a statement, Select said that iBUILD Construction has been awarded the responsibility of delivering one of its most prestigious developments, Six Senses Residences The Palm, Dubai, one of the last available plots on the West Crescent of Palm Jumeriah.

iBUILD is part of Innovo Holding, and is known for delivering, through its management and construction teams, iconic projects such as Marsa Al Arab, Coca Cola Arena, Etihad Museum and other landmarks.

Sameh Fam, Managing Director of iBUILD Construction (Innovo Group) stated: "We are excited to work on such iconic project with a key developer Select Group. We are proud to be the main contractor for the Six Senses Residences The Palm, Dubai project and are committed to delivering operational excellence, playing the role in creating a more sustainable community that will have a myriad of positive impacts. It is a privilege to add this landmark development to our portfolio of hospitality projects and we are looking forward to strengthening our cooperation with Select Group."

Construction work is well underway, with excavation works completed and shoring in progress, the developer said. The project is on track for its scheduled completion in 2024, it added.

Rahail Aslam, the CEO and Founder of Select Group, commented: "Ultra-luxurious projects such as Six Senses Residences The Palm, Dubai bring great minds together. Having sourced the best-in-class partners, such as architects and interior designers, to bring this project to fruition, we're thrilled to be working with iBUILD Construction LLC and look forward to surpassing buyers' and investors' expectations.

He added that four out of six towers were completely sold out during the launch stage and highlighted that the Peninsula Master Development in Business Bay marked a significant milestone for Select Group in 2022.

Furthermore, the developer has awarded contracts for the individual towers of the waterfront community, with works well underway and the completion of the master community scheduled for 2026.

Al Basti & Muktha LLC (ABM) will be at the forefront of delivering Peninsula Five, The Signature Collection, and the flagship of the development, Jumeirah Living Business Bay, a branded residence design by Killa Design, the mastermind designer behind Museum of the Future, the developer said.

Meanwhile, earlier this year, China State Construction Engineering Corporation was awarded the Peninsula One and Peninsula Two developments, while most recently, ECC Group was successful in their bid to lead the development of Peninsula Three.

"After a successful year of sales for the Peninsula project, our key focus pivots to ensuring that we deliver on our promise both from a product perspective and timeline while adhering to our premium standards and applicable policies.

"Based on their track record and the shared commitment to delivering excellence, we are thrilled to partner with Al Basti & Muktha LLC (ABM), ECC Group and China State Construction Engineering Corporation, as well as sub-consultants and sub-contractors, to bring this landmark development to life," Aslam stated.

Select Group has delivered more than 7,000 homes, equivalent to more than 20 million square feet. It currently has another 5,000 homes under construction, with a combined Gross Development Value of more than US$5.44 billion.