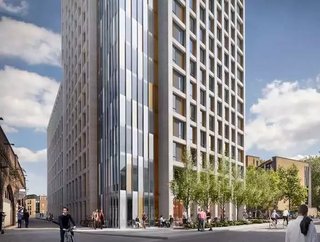 Downing Construction has been appointed to two major schemes in Manchester and London with a total contract value in excess of £140 million. The const...

Downing Construction has been appointed to two major schemes in Manchester and London with a total contract value in excess of £140 million.

The construction firm, which is owned by developer-investor Downing, has been appointed to a contract with more than £90 million to construct a mixed-use student development at Miles Street in London’s Vauxhall. The scheme incorporates 841 student bedrooms within a 36-storey building alongside 40,000 sq. ft of commercial space.

The company has also been appointed to deliver a contract worth more than £50 million, to construct the River Street student development in Manchester. Located between River Street and Garwood Street, next to the Mancunian Way, the high-profile site will house a vaulted building of 32, 10, and five storeys. The building will feature 791 student bedrooms and include a mix of studios, cluster bedrooms and apartments.

These key wins add to the businesses’ ongoing growth, and are set to push its turnover above the £100 million mark for the first time.

Alongside its most recent wins, the business is on site delivering major schemes across the country, including a £37 million mixed-use student accommodation development at Holbrook House in London, and Leeds Beckett University’s new £80 million Creative Arts Building.

Ian Orton, managing director at Downing Construction, said: “This current round of contract wins will take our workflow through into 2021 on secured contracts – putting the business in an extremely good position to continue to grow and explore high-profile projects across the UK.

“Our turnover for the 2018/2019 financial year is set to top the £100 million mark for the first time. This marks a key milestone for Downing Construction and one we look forward to building on over the coming years.”