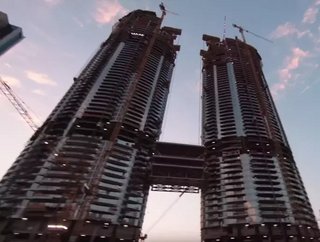 Dubai is continually pushing the boundaries of construction and design, with new and creative innovative builds throughout the Middle East. It has rece...

Dubai is continually pushing the boundaries of construction and design, with new and creative innovative builds throughout the Middle East.

It has recently been announced that Emaar Properties has been behind the completion of a new iconic Sky Bridge, which will incorporate eight duplexes, a 70-metre-long infinity pool and world-class restaurants.

Situated close to the Burj Khalifa and The Dubai Foundation, the new build will showcase stunning panoramic views, spanning 85 meters and reaching heights of 22 metres over three storeys.

Designed by Skidmore, Owings & Merrill, the towers will become a new tourist hub, in addition to the Sky Bridge, which has become a new feat in engineering and design within Dubai. Constructed with 4,500 tonnes of steel, the bridge was lifted into the position through Strand Jacking Technology, built specifically for the project, according to a press release.

Mohamed Alabbar, Chairman of Emaar Properties, said: “Building and lifting the Sky Bridge is the result of the hard work and collaboration of some of the best international experts in the field, who addressed various challenges through their innovative and creative approach. They have accomplished a remarkable engineering feat that will serve as a referral point in modern construction.”

Completed in 365 days, with over 300 professionals ensuring the success of the build, where the bridge was divided into five segments weighing over 400 tonnes per segment, which were then assembled up to 200 metres high. A steel frame was incorporated to hold the weight load as the bridge connected with the tower.