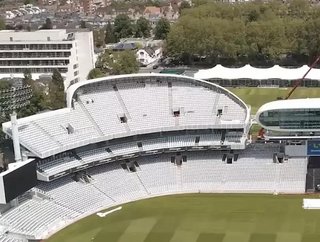 The redeveloped Compton and Edrich stands were designed by WilkinsonEyre, constructed by ISG and engineered by global engineering consultancy Buro Happold

Lord's Cricket Ground has officially opened two stands which elevate spectators' viewing and hospitality experience at the 'home of cricket'.

The redeveloped Compton and Edrich stands were designed by WilkinsonEyre, constructed by ISG and engineered by global engineering consultancy Buro Happold. Essentially an upgrade of the Nursery Eastern End, the capacity of both stands has increased from 9,000 to 11,600 seats.

Marylebone Cricket Club (MCC) President and Sri Lankan cricket great Kumar Sangakkara officially opened the stands, which provide a range of seating and hospitality areas, new concourses and toilets, and are designed to blend in with the central Future Systems' Media Centre - a trio of modern structures which contrast with the traditional pavilion at the opposite side of the ground.

MCC Chief Executive & Secretary Guy Lavender, said: “It’s been fascinating watching these stands evolve over the past two years. In what has been a challenging time for everybody, finally opening these stands fully to be enjoyed by of cricket supporters for this Test match is a significant, and heart-warming, moment.

"There has been an incredible amount of hard work to achieve this milestone and I would like to thank everybody who has been involved in this project, which has truly been a team effort.”

With the Premier League season kicking off on Friday, newly promoted Brentford will be marking their arrival in style - having one of the newest facilities in the top league.

Brentford Community Stadium will also host London Irish RFC, whose training base at Hazelwood, Sunbury, also designed by AFL Architects, is a few miles away. Click here to watch a behind-the-scenes video tour.

Leicester City's King Power Stadium development is out for public consultation, with plans to increase capacity to 40,000 seats, build a 220-room hotel and develop a multi-purpose event and entertainment arena. Proposals also include a club retail space, residential and commercial areas, and multi-storey car parking facilities. Everton Football Club recently took possession of its new Bramley-Moore Dock site and contractors Laing O'Rourke are now working on the first phase of the project. The stadium will hold 52,888 seats on completion.

In rugby, the first match at Edinburgh's £5.7m ground situated in the shadow of BT Murrayfield will take place on September 11 with a curtain-raiser against Newcastle Falcons, according to The Scotsman.