Norway are proposing to build the first shipping tunnel 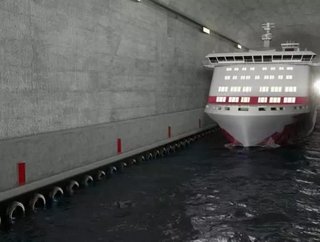 The Stadhavet sea is known to be treacherous within maritime travel, at which a new shipping tunnel is being proposed by the Norwegian Coastal Administr...

The Stadhavet sea is known to be treacherous within maritime travel, at which a new shipping tunnel is being proposed by the Norwegian Coastal Administration to enable safe passage. Architecture company Snøhetta has been behind the tunnel’s design, which would support over 100 ships a day once complete.

The project will need the approval of Norwegian Parliament, who would fund the 1.7km tunnel. Spanning heights of nearly 50 metres from ground to ceiling, and over 30 metres wide, the NOK 1 billion project would take approximately four years to complete.

The tunnel will be located in the Stad peninsula and is currently in the study phase, which is set to complete this year, with over 7 million tonnes of blasted rock set to be removed. The NCA will reveal its findings to the Department of Transport in May 2017 in order to highlight the benefits of the project, according Business Insider.

If approved, construction will be underway in 2019 and provide a boost to the region’s local economy and provide increased advantages within Norway’s transportation industry, with an increased movement of cargo. The tunnel will enable 16,000 tonnes, alongside an increased number of passenger ships, which will also utilise the tunnel.