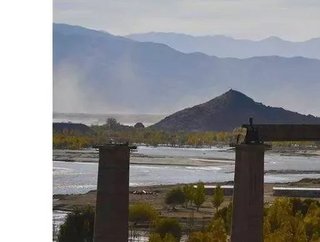 Railway project will link Tibet with the rest of China, cutting down transport times and improving trade and tourism links, experts say...

Not only will the Sichuan-Tibet Railway accelerate and enhance overall economic development of the Tibet region, but it will also play an important role in safeguarding border stability, with the railway set to run close to the Indian border in Arunachal Pradesh.

On October 31, China Railway announced the bidding results for the construction of two tunnels and one bridge, as well as the power supply project for the Ya’an-Linzhi section, indicating that construction of the project was set to begin imminently.

Starting from Chengdu, the capital of Sichuan province, the Sichuan-Tibet Railway travels through Ya’an and enters Tibet via Qamdo, shortening the journey from Chengdu to Lhasa from 48 hours to 13 hours, the report adds. Linzhi, also known as Nyingchi, is located close to the border China shares with the Indian state of Arunachal Pradesh.

The newly built Ya’an-Linzhi section runs 1,011 kilometres and includes 26 stations. Trains are expected to run at speeds between 120 and 200 kilometres per hour, a Global Times report says. The total cost of the entire Sichuan-Tibet Railway project is £37 billion, it adds.

Construction of the railway is of strategic importance to China as it benefits the overall development of Tibet, as it will greatly improve transportation between the region and the rest of the country, and put Tibet on the ‘fast-track’ to catching up with other more developed regions of China.

The railway will allow for advanced equipment and technologies to be brought into Tibet, while local products can be brought out, says Xiong Kunxin, an ethnic studies professor at the Tibet University in Lhasa, in the Global Times report.

He notes that both Sichuan and Tibet are rich in resources that are unique to each provinces’ natural landscapes, with huge mineral reserves, and a wide variety of medicinal herbs. Furthermore, the completion of the Sichuan-Tibet railway is expected to boost local tourism all along the line, Xiong adds.

“It will also enhance person-to-person exchanges between different regions and ethnic groups, promote understanding and cultural integration,” he says.

“After the Sichuan-Tibet railway starts operation, Tibet will have more exchanges with other parts of the Chinese mainland. Strategically, China's Tibetan region will have much stronger capabilities in material transportation and logistical supplies, Lin Minwang, deputy director at the Center for South Asian Studies at Fudan University, tells the Global Times.

Qian Feng, director of the research department at the National Strategy Institute at Tsinghua University, adds: “If a scenario of a crisis happens at China-India border, the railway will provide great convenience for China’s delivery of strategic materials.”