China Road and Bridge Corporation to Bring 5,000 Workers to Kenya as Construction Begins on New Railway 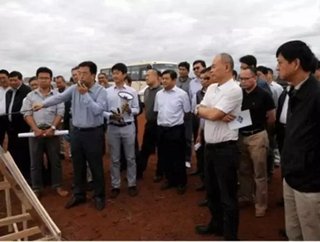 With construction on the 609km railway between Mombasa and Nairobi expected to begin next month, Kenyans have expressed disappointment that the government is giving away jobs to mainly Chinese workers that could have gone to locals.

Maina told Business Daily the move was to improve the efficiency of the project and make sure the three-year deadline is met. He said: "The contractor will bring in the workers and get additional ones locally. We have also commenced discussions to reduce timelines and ensure that the project is completed by 2017.”

Kenya signed a Sh314.2 billion (£2.1bn) Mombasa-Nairobi railway deal with China at State House in Nairobi in May. Ninety percent of the financing will come from China Exim Bank with Kenya covering the remaining 10 percent.

The Transport and Infrastructure ministry estimates that 60 jobs will be created for every kilometre of the rail project and it will employ at least 30,000 Kenyans.

The Standard Gauge Railway is intended to providing efficient and cost effective rail transport for both freight and passengers, reducing the cost of doing business and opening up Northern Kenya for exploitation of stranded resources and Provide landlocked Republic of Sudan and Ethiopia with access to the sea.

Freight trains running on the new line are expected to reach speeds of 120kph, while those carrying passengers are predicted to hit 180kph. A passenger journey from the port city of Mombasa to the capital Nairobi would take four and a half hours.

"It will take passengers four hours and 30 minutes to travel from Mombasa to Nairobi while freight will take eight hours. The project is slated to kick off on October 1st and take 42 months to complete," Uhuru said during the signing ceremony witnessed by Chinese Prime Minister Li Keqiang at State House in Nairobi.