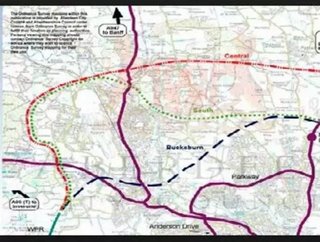 The Scottish Government has named Connect Roads as preferred bidder for the Aberdeen bypass.

The Aberdeen Western Peripheral Route (AWPR), which was delayed for five years following legal action, is worth £745m.

The project includes the bypass and the dualling of the Balmedie to Tipperty stretch of the A90 and is expected to be complete by Spring 2018.

At the announcement of the contract award, Transport Minister Keith Brown said: “This is great news for the people of Aberdeen and the north-east and underlines our commitment to reversing years of under investment which has led to the kinds of pressures we see on the road network in and around Aberdeen every day.

“Over the next three decades, our investment in the Aberdeen Western Peripheral Route project is expected to bring in an additional £6 billion to the local economy and create around 14,000 new jobs. During construction we would expect to see benefits similar in scale to the recently completed M74 scheme, which directly generated 900 construction jobs. It will also provide on-the-job training for apprentices and local employment opportunities.

Brown revealed that advance works for the AWPR project are underway, with SMEs already benefitting, including a contract worth some £500,000 for the construction of a local connecting road at Findon Junction.