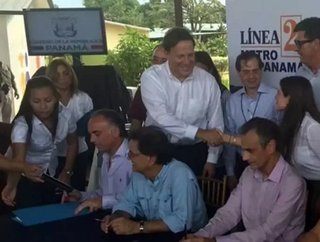 Louis Berger, as part of the Consorcio PML2, also including Spanish consultant partners Ayesa and Metropolitan Transports of Barcelona has signed a $32...

Louis Berger, as part of the Consorcio PML2, also including Spanish consultant partners Ayesa and Metropolitan Transports of Barcelona has signed a $32 million contract to oversee construction of Panama City Metro’s second line.

The five-year contract was signed during a signing ceremony with Panamanian President Juan Carlos Varela Rodríguez and senior government officials. The signing follows the award by the Panamanian secretary for the Metro announced on July 10.

Sofia Berger, Louis Berger’s Vice President in charge of Latin America and the Caribbean, said: “We are honoured to play a key role in the second line of the Panama metro system and welcome the opportunity to assist in developing Panama’s transportation network.”

Consorcio PML2 was selected for the project after receiving the highest proposal score based on technical and economic criteria.

The new 21-kilometer line is the second of four lines in the government’s plan to provide efficient, sustainable transport in the Panama City metropolitan area, which supports 1.2 million residents.

The line also includes 16 stations along an elevated track alignment from an interchange with Line 1 at San Miguelito serving the districts of December 24, among others.

“As one of the largest engineering firms in the world with regional headquarters in Panama, we will work closely with our Panama Metro client to deliver a transportation solution for the people of Panama by combining our 50 year history within the transportation sector in Latin America with our extensive global rail expertise, which includes signature programs in Ankara, Turkey; Bangkok, Thailand; Riyadh, Saudi Arabia; Doha, Qatar; and Mumbai, India.”