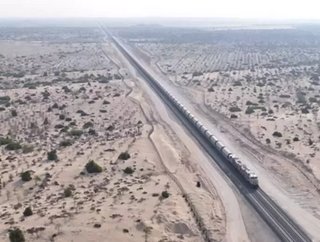 The number of working man hours invested in the UAE’s Etihad Rail programme has passed the 10 million mark, 250 days after commencement.

Faris Saif Al Mazrouei, acting Chief Executive Officer of the network, hailed the milestone and praised the workers for tackling the challenging desert conditions of the Western Region, base of the project.

The $11 billion train line system is 1,200 kilometres in length and will serve both commercial freight and passengers.

The freight line will operate two trains carrying 22,000 metric tonnes of granulated sulphur each day and could be opened up by the end of the year.

After this, the 628 kilometre second phase will connect Mussafah Port to Khalifa Port and Jebel Ali Port, due to be operational by the beginning of 2017.

The project will also involve the construction of four stations to connect to the Dubai Metro system. Potential sites for the stations include Jebel Ali Port, Al Maktoum International Airport, Dubailand and Meydan.

As well as serving the UAE, the new network will act as an important connector for the wider region, joining UAE to Saudi Arabia through Ghweifat in the west and Oman through Al Ain in the east.

The programme is managed by a joint venture between Parsons and Aecom.