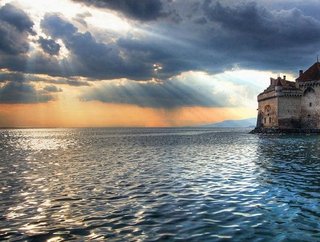 Standing on the shore of Lake Geneva, Chillon Castle was a home to the Counts of Savoy in the 12th century. The castle is well known for the poem The Prisoner of Chillon, written by Lord Byron, which tells the story of a Genevois monk who was imprisoned there in the 1500s.

Built high on the hills south of Stuttgart, Hohenzollern Castle has been rebuilt twice in its long and storied history. Originally built in the 11th century as the home of the Hohenzollern family, who later became the ruling family in Germany, the third version of the castle was built in the 1800s for King Frederick William IV of Prussia.

The exact origins of Edinburgh Castle are unclear, with evidence of a human settlement on the site dating as far back as the Iron Age. The castle has been of vital importance throughout Scottish history from the 12th century, and today it is Scotland’s most visited tourist attraction, with over 1.2 million people visiting the site in 2011.

Rising out of a rocky crag near the Guadarrama mountains, the Alcázar of Segovia resembles the bow of a gigantic ship coming out of the earth. Evidence points to the sites being used as a defensive settlement by the Romans. The initially Roman fortifications were later built upon by the Arabs and then again rebuilt by King Alfonso X of Castille.

Originally the seat of the emperor, the Forbidden City is now one the most widely known tourist attractions in the world. Now known in as ‘Gugong - 故宫’ (literally meaning ‘ancient palace’ or ‘former palace’), it was originally known as ‘Zijincheng - 紫禁城’, which means ‘purple forbidden city’. The ‘zi’ or ‘purple’ here refers to the ‘ziwei’ star in Chinese astrology, which was said to be the home of the Celestial Emperor. The Forbidden City, consequently, was named to be the earthly counterpart to this heavenly abode.

This striking castle is the site of a famous 14th century siege. Built around the top of a 520ft dolomite rock, Hochosterwitz Castle can be seen from 30 kilometers away on a clear day.

This castle-town is built on a small island just off the coast of Normandy. The island the castle is built on is what’s known as a tidal island; it can be reached by foot from the mainland when the tide is low, but is inaccessibly at high tide. Consequently, this site is virtually impossible to besiege

Destroyed by the Mongols in the 13th century and then rebuilt by the Saxons in the 14th century, this mountain-top castle has been thought by some to be the inspiration for the home of Bram Stoker’s Dracula. Reportedly, this castle is currently for sale.

Built much more recently than the other castles on this list, Neuschwanstein Castle was commissioned in the 19th century by Ludwig II of Bavaria, who intended the lavish structure to be a personal retreat.

However, Ludwig died before it was complete, and the castle is now open to the paying public, amongst whom it has proved immensely popular, with more than 1.3 million people visiting every year.

The picturesque castle was also the inspiration for Disneyland’s Sleeping Beauty Castle.

Dating back to the 14th century, this castle was built to include highly complex and effective defensive systems, including three moats, loopholes for archers to fire through, a series of mazes to confuse attackers, and a number of warehouses designed to hold rice, salt and water in the event of a siege.

The castle has survived intact to this day, despite the Himeji area being extensively bombed during World War II.