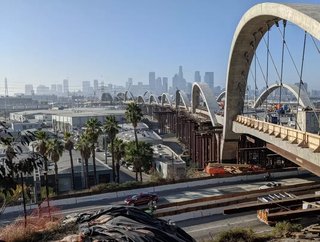 COWI has marked an engineering milestone on the new 6th Street Viaduct construction in Los Angeles, following the successful hanger installation of the first of 10 spans of the new viaduct.

Crossing Freeway 101, several rail roads and the LA river, the 6th Street Viaduct replacement project is one of the largest bridge projects currently underway in the city. Originally built in 1932, the bridge – commonly recognised for its appearance in the hit movie-musical Grease - provides a vital connection between Boyle Heights and Downtown LA’s Art District. In 2016, the bridge was demolished following the decision to replace the existing 6th Street Viaduct due to the structure becoming seismically vulnerable.

At 3,060-ft-long and 100-ft-wide, the redevelopment of the bridge - designed by Michael Maltzan, Architect, and HNTB, Structural Engineer - includes 10 network arch spans, with a total of 388 hangers supporting the bridge deck. Appointed as the Erection Engineer on the project with an extensive complex structure expertise, COWI worked closely with joint venture Skanska Stacy and Witbeck (SSW) to develop a construction sequence, which includes step-by-step camber and stress analyses, and hanger installation and stressing procedure of the bridge.

The current construction stage concludes the hanger installation of the first span as well as the removal of the falsework underneath.

“If you consider each arch span as an individual bridge, then this essentially marks the completion of the first of ten bridges - making this such an exciting milestone for the project,” said Tobias Petschke, Senior Project Manager at COWI North America.

COWI has taken many considerations to ensure the safety of both the public and the construction crew during this complex bridge erection. This included the design of customized lock-up devices to stabilise the seismic pendulum bearings of the bridge during construction.

"Having the opportunity to apply our expertise to projects of this kind reminds you just how important our work is," added Petschke. "By exploiting some of the most advanced techniques we can ensure the safe and sound erection of complex infrastructure projects."

SSW and COWI carefully monitored the falsework supporting the deck and the hanger forces during installation to ensure that everything went according to plan. Performing such a procedure over highway 101 and maintaining uninterrupted traffic required the highest consideration of public safety from the team.

The next step is the closure of the superstructure continuity followed by the hanger installation in the second span, with completion of the bridge planned for mid-2022.

Dodge Construction Network - among the largest independent data platforms supporting the multi-trillion-dollar US commercial construction industry - has announced that Clearlake Capital Group (together with its affiliates) will make "a significant new equity investment" to accelerate its strategic growth plan. With this investment, Clearlake becomes an equal partner with existing DCN investor Symphony Technology Group. Terms of the transaction were not disclosed.