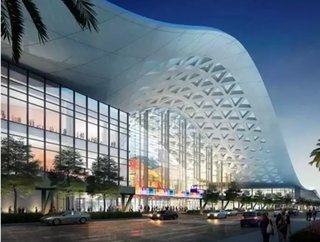 The Board of Directors of the Las Vegas Convention and Visitors Authority (LVCVA) has unveiled the redesign plans, valued at $860mn, for the expansion o...

The investment will see 1.4mn square feet of space added to the convention center that will include more than 600,000 square feet of new and leasable exhibit space.

“This is one of the most important days in the history of the LVCVA,” said Rossi Ralenkotter, LVCVA Chief Executive Officer. “These drawings show a modern, innovative design that is as iconic as our vibrant city.”

The center will be used to drive further tourism to Las Vegas – an industry that the region relies heavily upon. According to the LVCVA, South Nevada’s economy benefits by $60bn annually from the tourism industry, supporting more than 407,000 jobs.

“Southern Nevada’s economy is driven by tourism and this expansion will propel our convention center forward to enable us to maintain our status as the number one trade show destination in North America,” Ralenkotter continued.

The phase two expansion process of the center is expected to complete in time for the International Consumer Electronics Show (CES), with phase three of the project set to complete two years later.

“Our biggest goal was to give Las Vegas a convention center that will be iconic, with a design that nods to all of the very unique architecture in the city’s history, while also providing contemporary, cohesive design aesthetic across the entire property,” said Rob Svedberg of tvsdesign - a company that was selected alongside Design Las Vegas to provide the design services for the project.

Combined, phase two and phase three of the project are expected to support 14,000 construction jobs and 7,800 permanent jobs upon completion.