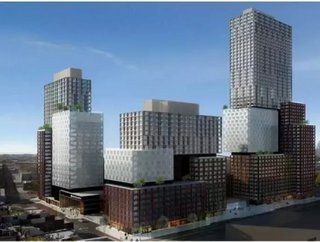 Skanska USA Building has terminated its Construction Management and Fabrication Services Agreement for the Atlantic Yards B2 Residential Project with Fo...

Construction Global reported last month that Skanska had halted work at the site as well as its prefabrication hub on the contract worth $117m.

Skanska said it notified the B2 Owner on August 8 of its intent to terminate if the B2 Owner did not address its many material breaches under the agreement, and that the August notice was issued after a series of unsuccessful efforts by Skanska throughout 2014 to resolve the significant commercial and design issues facing the B2 project.

The company said that consistent with its behaviour, the B2 Owner again took no action to remedy its breaches, leaving Skanska no choice but to terminate the agreement and pursue its rights to be paid for the millions of dollars in extra costs it has incurred to keep the project going and its modular factory workers working.

Commenting on the situation, Skanska USA Building Co-Chief Operating Officer Richard Kennedy said: “Today is an incredibly disappointing day. Our company has a long history of working with our clients through all kinds of challenges so, at the end of the day, we deliver the best product possible to our clients and the communities in which we live and work. In New York alone, we have worked on some of the city’s most iconic structures and with each of those projects, we have finished the job. While the B2 project certainly has its issues, we were hopeful that our client and partner would address them so we could move forward with building much-needed affordable housing in Brooklyn.

“But we could not continue to incur millions of dollars in extra costs with little hope that Forest City would take responsibility for fixing the significant commercial and design issues on the project. We pride ourselves on being an innovative company and we will continue to build using prefab and modular techniques to move the construction industry forward. This issue will not deter us from continuing on that journey of innovation.”

Comment from the B2 owner was not available at the time of writing.