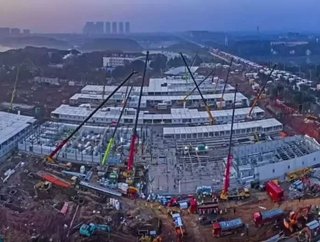 A thousand-bed hospital in the coronavirus-stricken Chinese city of Wuhan began treating patients yesterday after construction was completed, just 10 da...

A thousand-bed hospital in the coronavirus-stricken Chinese city of Wuhan began treating patients yesterday after construction was completed, just 10 days after it began on January 23.

Three companies were ordered to build Huoshenshan Hospital. Thousands of workers operated more than 800 units of machinery, and worked in shifts around the clock. CGTN’s timelapse video shows the incredible achievement.

Approximately 1,400 medical staff from China’s armed forces have been drafted in to treat patients from today at the first hospital, called Huoshenshan, Chinese for ‘Fire God Mountain’.

A second makeshift hospital, Leishenshan, similar in size and speed of construction, is expected to open later this week.

To mobilise so quickly on the two Wuhan hospitals, authorities replicated one built in Beijing for the Sars epidemic.

They spent just five hours on the design plan and had a draft within 24 hours, according to state news agency Xinhua.

“For a project of this scale, it usually takes at least two years,” Fang Xiang, a project manager for one of the companies, told Xinhua.

“It takes at least a month to construct a temporary building, not to mention a new hospital for infectious diseases.”