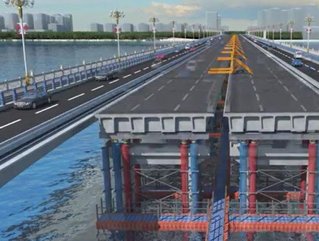 "The successful completion of the Beijing Road Yihe Bridge jacking project will greatly ease the traffic situation between Beicheng New District and Hedong District," said Li Baoqiang, who is in charge of the reconstruction project.

Reconstruction involves the simultaneous lifting of two new 15m-wide bridges on the north and south sides of Yihe Bridge. The entire upper structure of the old bridge will be lifted by 2.57m. The lifting of the northern and southern sections was completed in November 2021 and February 2022 respectively.

Currently, the cover beam of the southern section is being heightened and is on track for completion in early April. The entire project is planned to complete before October 1, which will ensure that traffic on both sides of the Yi River is smooth, spurring the regional economy.

As Beijing Road Yihe Bridge is a transportation hub connecting New Beicheng and Hedong districts, it is important that it functions well and safely. Bridge jacking is essential for the repair and maintenance of bridges.

In November 2019, dynamic and static load tests were carried out on Beijing Road Yihe Bridge. The tests showed that the bridge met bearing capacity requirements and had sufficient safety reserves. Therefore, there was no need to demolish the old bridge.

To meet flood control requirements, in which the minimum elevation of the bottom beam has to be 0.8m higher than the 100-year flood level of 72.36m, the superstructure of the old bridge also had to be raised by 2.57m.

Furthermore, the current bridge is supported by a 30m-wide simple support box girder. However, as there are many piers and columns under the bridge, a 60m-wide girder was recommended instead for a better bridge view.

How 3D modelling and drones are restoring landmark US bridge