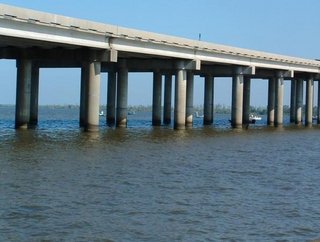 One of the oldest transportation structures is the unassuming bridge, allowing travellers to reach their destinations, crossing areas of water or to...

One of the oldest transportation structures is the unassuming bridge, allowing travellers to reach their destinations, crossing areas of water or to avoid dangerous obstacles, continually providing sufficient support in both material and design.

This month we take a look at the top 10 longest bridges in the world, which have been built against the increased need for commuters to gain access to employment, housing, alongside providing significant access within tourist destinations, utilising a number of different materials, designs and functions.

Opening in 2008, the Hangzhou Bay Bridge has become the longest sea-crossing bridge worldwide at 22.2 miles, connecting Ningbo's Cixi to Jiaxing, while also reducing travel time between Shanghai and Ningbo.

The cable-stayed bridge took nearly 10 years and 600 experts to design due to its nature and complexity. Constructed as a cable bridge in order to counteract China’s unpredictable weather conditions and located in an area prone to earthquakes, the bridge has been built with the use of heavy duty cranes, utilising steel for support and durability.

This use of material has enabled the bridge to have increased resistance to corrosion from strong tidal pressures, unlike similar bridges which have been constructed with concrete supports, with the widening of the bottom parts of the bridge.

Completed in 2007 and spanning 22.3 miles, the Yangcun Bridge has become part of the Beijing-Tianjin intercity railway.

Located within Louisiana, the Manchac Swamp Bridge spans 22.8 miles and runs over Lake Maurepas. Opening in 1979, the twin concrete trestle bridge carries a third of Interstate 55 over the Manchac Swamp, with over 120,000ft of concrete used within its construction.

Similar to many bridges which have now been constructed, the Lake Pontchartrain Causeway was an idea which originated in the early 19th century, due to the continuous use of ferry services within Louisiana, which began to come into fruition in the 20th century.

Encompassing 23.9 miles, the southbound bridges officially opened in 1956; however, the second round of construction works did not complete until 1969, with an overall cost of $76 million. Although the bridge amassed approximately 50,000 vehicles per annum upon its original opening, around 12 million commuters access the bridge per year.

Constructed with over 9,000 concrete pilings, the toll bridge has reduced time travelled between New Orleans and the New Orleans metropolitan area, and has become a National Historic Civil Engineering Landmark.

Completed in 2010, the Beijing Grand Bridge has become one of the longest bridges in the world at 29.9 miles.

Although it does not cross water, the Bang Na Highway is considered one of the longest bridges in the world, with six lanes spanning over 33.5 miles.

Completing in 2000, the construction utilised over one million cubic metres of concrete, and was built in a partnership of Bilfinger and Berger and Ch. Karnchang Public Company.

Completing in 2008, the Weinan Wiehe Grand Bridge encompasses 49.5 miles, crossing the Wei River and connecting Zhengzhou and Xian. Although finalised in 2008. The rail line was not opened until 2010.

Completed in 2010, the Tianjin Grand Bridge links Langfang and Qingxian in China to the Beijing-Shanghai High-Speed Railway, encompassing 70.6 miles and becoming the third longest bridge in the world.

Part of the Taiwan High Speed Rail (THSR), the Changhua-Kaohsiung Viaduct incorporates 97.8 miles of track, running from Taipei to Kaohsiung.

Opening in 2011 after a five-year construction period, the Danyang-Kunshan Grand Bridge covers an impressive 102.4 miles on the Beijing-Shanghai High-Speed Railway. Built at a cost of $8.5 billion, the construction has reduced congestion and will accommodate for the growing population within the region, enabling trains to run every 5-10 minutes at peak times.