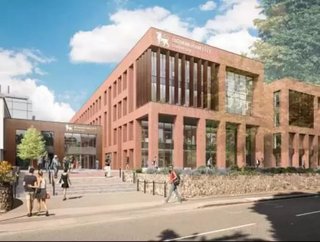 A new &pound;41 million building under construction on Birmingham City Universitys campus in Edgbaston has been nominated for a worldwide award that pra...

A new £41 million building under construction on Birmingham City University’s campus in Edgbaston has been nominated for a worldwide award that praises the use of innovative technologies in the construction industry.

The 10,500m² building currently taking shape on the University’s City South Campus on Westbourne Road has been shortlisted in the Construction (Large Building) category of the Architecture, Engineering and Construction (AEC) Excellence Awards.

The new building is being created by BAM Construction and forms part of the University’s investment in Science, Technology, Engineering, and Mathematics (STEM) subjects.

Among several innovations incorporated in to the development, the University and BAM have utilised building information modelling (BIM) across cloud-based mobile technologies on the construction and design stages to reduce costs and save time.

Accessing data simultaneously on an iPad whilst out on site or back in the office on the web-portal, for example, provides visibility across all stakeholders and allows for instant notifications in real time.

This has enabled location co-ordinates to be captured digitally, reducing human error, as points are only recorded once. On this project, the time taken to produce and record information traditionally would have taken approximately 11 hours, whereas the technique developed has condensed the time to around just 10 minutes.

Furthermore, the collaboration has reduced the necessity and added costs of having a second surveyor on site assisting the principal site surveyor.

Staff from the University’s Estates and Facilities Management division have teamed up with academics from the institution’s School of Engineering and the Built Environment alongside BAM Construction in a unique partnership that has seen these innovations implemented within the build process.

Richard Draper is the University’s BIM Process Manager and was employed by the institution five years ago, when usage of BIM was in its infancy. He is also an alumnus of the University, having studied Architectural Technology at the institution. He said: “Through our projects we have adopted self-developed and self-proven cutting edge practices in BIM, which has led to some excellent research and publications by our academics in the School of Engineering and the Built Environment.

“The City South Development Project is one of the latest in a breed of projects being run at a level of BIM which prove to be better than any before. We are fortunate enough to be working in partnership with BAM – one of the earliest adopters of BIM and the UK – and with their involvement we will succeed to a level not seen elsewhere in the industry to date.”

Designed by Sheppard Robson, the new four-storey building will be equipped with a suite of laboratories, ultrasound facilities and specialist teacher training rooms.

It will also enable the relocation of the University’s School of Education, consolidating the Faculty of Health, Education and Life Sciences on to one site in 2017.

The new project has so far produced one academic paper, with two more in the pipeline that will help develop new applications to help enhance the BIM processes adopted for future facilities management of the campuses at Birmingham City University.

Erika Pärn, Architectural Technology Lecturer, Birmingham City University has led the research and said: “The BIM managers at both the University and BAM have both been extremely helpful in streamlining research and innovation from our Faculty into their existing working processes, and have helped us better understand what are the current challenges of implementing BIM in the construction industry.”

“We hope that the successful collaboration between the research activities in the University’s Faculty of Computing, Engineering and the Built Environment, the Estates and Facilities Management team and BAM will continue to be as fruitful as it has been, but, more importantly, further inform our curriculum and teaching with innovative practice.”

BIM software provider Autodesk are behind the AEC Excellence Awards. As well as being utilised on the new Health, Education and Life Sciences building, students within Birmingham City University’s School of Engineering and the Built Environment are also taught with BIM applications from Autodesk.

Amar Hanspal, Senior Vice President, Products, Autodesk said: “We’re thrilled to announce the finalists for the first AEC Excellence Awards. The transformative nature of these projects from all over the world shows how the AEC industry is rapidly embracing connected BIM technologies. Our finalists truly represent the future of making things for AEC.”

A total of 162 submissions were received from all over the world, with 29 countries represented. The City South Development Project is up against two Chinese developments in its category; Tencent's Beijing headquarters and Tianjin Chow Tai Fook Finance Centre.

Winners in the AEC Excellence Awards will be announced on Wednesday 16 November at a ceremony in Las Vegas, USA.