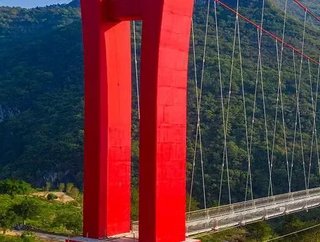 We take a look at the recently completed “Glass Bridge” by UAD, spanning a length of over 526 metres...

The bridge is based in the Huangchuan Three Gorges Scenic Area in the southeast of China. The structure has been designed symbolically in relation to connection and communication.

Officially named ‘Glass Bridge’, the structure has broken the Guinness World Records, now being known officially as the longest glass-based suspension bridge in the world.

The pedestrian bridge crosses the Beijiang River system in the Pearl River Basin and spans the cliffs on either side of the river. It “harmoniously coexists with nature”.

The bridge was completed by The Architectural Design & Research Institute of Zhejiang University (UAD), and incorporates several innovative and unique design and architectural features. The glass used on the bridge is three layers of thick tempered laminated glass, with a total paving thickness of 13.5cm (5.3 inches). The glass is very transparent and has a visible transmittance of over 99 percent.

Designed with a goal to combine “the solid and void, the modern and the classical”, the structure features curved stainless steel guardrails whilst the cables and the bridge towers are finished in red to add contrast with the glass paving.

The sheer length of the structure, combined with the seasonal typhoons that are regularly experienced in the Guangdong province, means a smart and complex design was used in order to prevent the bridge from damage in challenging weather conditions.

Thankfully, the UAD team used a variety of wind simulation techniques during the planning and design of Glass Bridge, including the adoption of wind tunnel testing, along with finite elements simulation, which tested the strength of the materials when stressed with vibrations.

In addition to this, an oblique wind-resistant cable system is fitted to the bridge in order to further make the bridge more resistant to heavy winds.

The Architectural Design & Research Institute of Zhejiang University said: "This glass bridge is suspended at a height of 201 meters, with a width of 8.8 meters. Spanning a length of 526.14 meters, it has broken the Guinness World Records as the world's longest suspension glass bridge. Its completion is a miracle”.

UAD then went on to say: "So far, it has become a new local landmark, and has been attracting a large number of tourists and helping inject vitality into the local tourism industry."