The design story behind the Rotterdam Terraced Tower 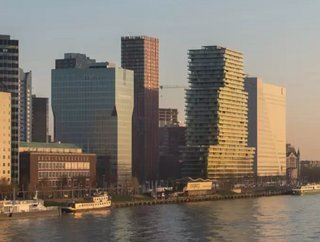 Rotterdam's evolving skyline has a striking new architectural addition with the completion of the Terraced Tower, which was designed by Oz and constructed by Besix.

At the site of the Terraced Tower, Boompjes 55 used to be the 1965 office building of jazz pianist Herman D. Bakker. The initial plan was to leave Bakker’s building as the substructure and to realise the new building on top. However, this proved too technically challenging.

Oz wanted a high quality for the apartments, with roof terraces on the sloping sides. For the first time, the idea emerged that The Terraced Tower could also be something other than a conventional tower. In the final design, the pyramid was abandoned but the idea of a ring of outdoor space around the apartments remained, and the decision was made to stack floors with glass facades in between, providing the tower with its novel appearance.

The tower is formed in three parts. The first layer is a replica of Bakker’s building. The second and third layers have an increasingly square shape with strong horizontal articulation. Every component, from the balcony railing to the flexible façade system, has been worked out in detail and the floors protrude.

From the street, the wooden ceilings determine the image of the building. For the residents, the large terraces form an extension of the home to the outside, a zone between the interior and the city. The continuous glass railing creates maximum visibility and creates a zone around the building which is protected from the wind. All the rooms in the apartments are connected to the terrace, allowing for different access.

The top of the tower is mounted with Solarwatt solar panels – a major challenge due to the heavy winds typical for such a high structure. The 110-metre-high block features 216 Solarwatt Vision 60M glass-glass modules, mounted on a concrete and steel roof. Solar cells were also installed on walls, in a façade comprising 111 Solarwatt Construct glass-glass modules. Click here to watch a video. The eye-catching building has 344 flats, ranging from 52sqm to 136sqm. CBRE Global Investors is the owner of the rental part of The Terraced Tower. The project was awarded to BESIX Nederland by the Dutch real estate company Provast.

Located alongside the river Maas, the tower not only provides its residents with stunning views, it also offers many other advantages. Hundreds of stores, restaurants, bars and the famous Markthal are all around the corner. In addition, the tower is situated at a main road and the train station is only a seven minute bike ride away. Underground parking is available for 122 cars, divided over two floors, and a large bicycle parking is also provided.

Technology played a key role and teams used the SCIA Engineer calculation software to design the concrete structure and the foundations of the building.

"For the design of the building, we used BIM and we had a 3D model, but on site they needed 2D drawings," said Kelvin Roovers, Parametric Designer at Besix. "Making such drawings is a time-consuming process and involves repetitive work. Thanks to the digital automation tools we developed ourselves, we were able to eliminate as many manual operations as possible and the final production was eight times faster than expected. Costs were reduced, as was the risk of human error."