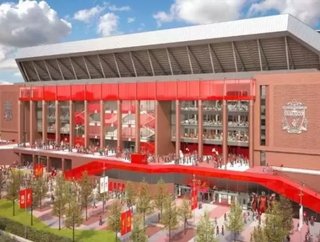 Carillion has been appointed preferred bidder for Liverpool Football Club’s Anfield stadium main stand expansion and the associated public realm works, in a contract worth some £75m.

The project is expected to start later this year, subject to planning consent, and is likely to take around 20 months to complete.

If approved, the proposed works would see the Main Stand’s capacity rise by approximately 8,300 to 21,000, taking the stadium’s overall capacity to around 54,000.

Commenting on the award of the contract, Carillion Chief Richard Howson said: “I believe that being selected for this prestigious project reflect Carillion’s reputation for high standards of quality, health and safety and sustainability.

“We looking forward to working closely with Liverpool Football Club to create new world-class facilities at its famous Anfield Stadium.”

The contract win was announced as Carillion released its half-year trading update, in which it said its first-half performance was in line with expectations and that full-year targets remained unchanged.

The company said it planned to mitigate the impact of the construction work by maintaining as much as possible of the existing Main Stand in operational use for the duration of the project.

Carillion has also committed to providing placements for at least 50 apprentices.