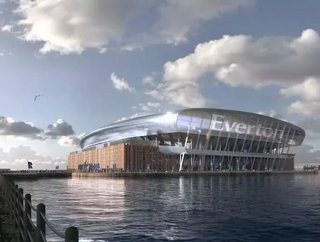 Everton Football Club has revealed the proposed designs for its new stadium which would be built on semi-derelict dockland in North Liverpool (at the Br...

Everton Football Club has revealed the proposed designs for its new stadium which would be built on semi-derelict dockland in North Liverpool (at the Bramley-Moore Dock site) and deliver a £1bn boost to the city’s economy as part of Peel L&P’s Liverpool Waters Development.

The concept, from world-renowned architect Dan Meis, features a brick, steel and glass design inspired by the historic maritime and warehouse buildings nearby. The stadium would be made up of four distinctive stands including a large steep home stand to the south that will house 13,000 Evertonians on matchdays. Supporters will be as close to the action as regulations permit as the club seeks to capture and amplify the intensity and intimacy of Goodison Park in a new modern arena.

Everton’s Chief Executive Officer, Prof. Denise Barrett-Baxendale commented: “Today marks an incredibly important milestone for us as we seek to build a new stadium which will act as a ‘game changer’ for the club and our city region.

“Our proposed stadium design takes its inspiration from both our city’s maritime history and from our club’s rich heritage and traditions.

“It is, first and foremost, a stadium for football, for our passionate fans and for our players. A stadium that gives Everton Football Club a platform for growth both commercially and socially. But it is also a stadium for the entire city and a development which will deliver transformative benefits in terms of regeneration and inclusive growth for the whole Liverpool City Region and for North Liverpool in particular.”

The Club also revealed its plans for the redevelopment of Goodison Park to create a range of community assets such as homes, health, education and enterprise amenities as well as the introduction of public space which will include a lasting tribute to the Club’s current home of 127 years.

Darran Lawless, Development Director, Peel L&P’s Liverpool Waters added: “Liverpool Waters will be home to five distinct and unique neighbourhoods and the interest that a new potential stadium for Everton FC has generated has shone a spotlight on the northern end of our scheme.

“It’s a fantastic opportunity for the whole city and we are delighted that that such a high-profile development will be part of Liverpool Waters’ £5 billion project to regenerate 60-hectares of the city’s former docks. Everton is a fundamental part of a growing list of high calibre partners that we are working with as excitement around the development continues to grow.”

Research carried out by international property consultancy CBRE indicates the proposals would deliver a £1bn boost to the city’s economy with the potential for up to 15,000 new jobs generating £34m of income to local families.