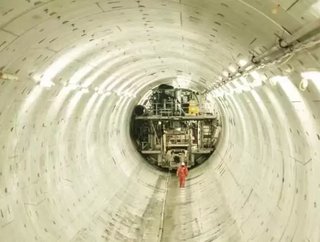 The start of major work on the Thames Tideway Tunnel &ndash; also known as the &lsquo;super sewer &ndash; got underway today with the manoeuvring of a c...

The start of major work on the Thames Tideway Tunnel – also known as the ‘super sewer’ – got underway today with the manoeuvring of a crane into place at Blackfriars on the Thames.

The purpose of the super sewer is to drastically reduce the overflow into the river. Large parts of the system were constructed 150 years ago and although the brick tunnels are said to be structurally sound, they weren’t built to manage the capacity that’s required today.

When the existing sewers were built, London only had a population of around two million. Today the population stands at more than eight million. Not only is much more sewage produced and more water used but there’s now where near as much green space as there once was to soak up rain water.

The original system was designed to carry waste and excess rain water to sewage treatment works around London. There were also Combined Sewage Overflow (CSO) points along the river that would allow excess to be sent back into the Thames to stop it from flooding the streets. This was a very rare occurrence back then but these days the points have to be opened around once a week. That’s 39,500,000 cu m of sewage that’s emptied into the river each year.

The seven-year project will see a 25km tunnel constructed following the route of the river. It’ll be 7m in diameter and will connect to the most polluting CSOs to carry sewage away rather than sending it into the Thames. The tunnel will also act as a storage tank for sewage until it can be treated by Beckton Sewage Treatment Works.

There will be three main sites where tunnel boring machines are lowered into the ground. Tunnelling will be undertaken 24 hours across different sites. Much like the Crossrail tunnels, the machines will both excavate and lay concrete segments. The tunnel will be finished with a concrete coating.

Of course, it’s not as simple as simply building the tunnel in a straight line. It’s designed to get deeper for every 790m it travels so sewage naturally flows from one end to the other. There’s also the challenge of dodging existing tunnels such as underground train lines.

Central Project Manager for Tideway, Andy Adler said: "The 20-m (66-ft) wide barge had to be carefully threaded under seven bridges and through the traffic on one of the busiest working rivers in the world. Alongside the man-made challenges, the crane also needed perfect tidal water levels and good weather before the movement could go ahead."

Tunnelling will begin in 2017 with the project expected to be complete by 2021.