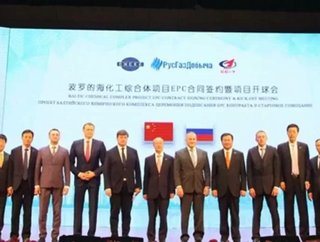 CNCEC and Baltic Chemical Complex (a subsidiary of RusGasDobycha) have signed an agreement to build a $13.3bn petrochemical plant which will be the larg...

CNCEC and Baltic Chemical Complex (a subsidiary of RusGasDobycha) have signed an agreement to build a $13.3bn petrochemical plant which will be the largest in the world.

The deal to build the Baltic Chemical Complex will see China National Chemical Engineering Group (CNCEC) take on the role of general contractor for what Dai Hegen, chairman of CNCEC, has described as the biggest ethylene integration project in the world

The project (with a contracted period of 60 months) is divided into three phases: infrastructure extension, early stage engineering, and project implementation.

Since the Belt and Road Initiative was introduced in 2013, CNCEC has grasped opportunities to develop its globalisation roadmap. The company currently has more than 320 projects under construction overseas, worth more than $58bn. These projects cover more than 60 countries and regions including Russia, Indonesia, Malaysia, United Arab Emirates, Saudi Arabia, Pakistan, Turkey and Egypt.

RusGasDobycha was established in 2012 as a part of a partnership agreement with the National Chemical Group, CJSC, one of the leading companies of the Russian mineral fertilisers market. The company's goal is to provide economically profitable gas production to increase efficiency and reduce the cost of mineral fertilisers produced by the National Chemical Group as well as other products of gas chemical production.