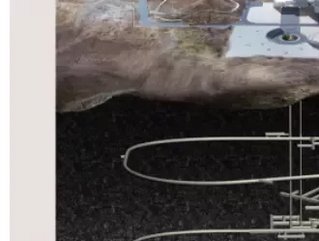 China has begun constructing its first underground research laboratory in the Gobi Desert - following more than 35 years of research - to determine its suitability for storing future high level radioactive waste.

As part of the support from the International Atomic Energy Agency, 35 Chinese and 11 international experts took part in a six-week virtual expert mission earlier this year to provide input, guidance and recommendations to support plans for the in-situ laboratory.

“The safe disposal of high level radioactive waste is one of the critical missions for the sustainable development of China’s nuclear industry,” said Liang Chen, Vice President of the Beijing Research Institute of Uranium Geology (BRIUG), which is constructing the underground research laboratory.

China has been working on identifying a suitable site for a HLW repository since 1985, and since 1999 those efforts have been supported by the IAEA.

The country’s strategy for HLW disposal consists of three stages, with stage one – laboratory studies and preliminary site selection – completed in 2020. The second stage, underground in-situ testing, is set to take place from 2021 to 2050, following the construction of the underground research laboratory. The final stage – the construction of the disposal facility – is planned to take place from 2041 to 2050, assuming the in-situ testing confirms the area’s suitability.

High-level radioactive waste can remain radioactive from thousands to hundreds of thousands of years. The internationally accepted solution for its safe and secure long term management is geological disposal in a facility several hundred metres underground. A geological disposal facility is under construction in Finland. (Watch the video Onkalo – A Solution for Nuclear Waste for more details).

“The construction of an underground research laboratory is an opportunity for advancement in the science and engineering of geological disposal facilities and an essential component in a sustainable energy future for countries,” said Stefan Joerg Mayer, Head of the Disposal Team at the IAEA. “Despite the constraints of the pandemic, we were able to design, organize and lead an innovative virtual mission to provide expert assistance to China in the construction of this new R&D facility.”

BRUIG requested the IAEA to provide support on characterisation of the rock mass, as well as scientific research, prior to construction.

The broad range of areas covered resulted in recommendations related to construction, but also guidance related to the implementation of its laboratory R&D plans during the construction phase.

“This virtual Expert Mission was very timely as construction of the underground laboratory began this summer and it provided critical support to this effort,” said Chen. “It has made a great contribution in promoting the sustainable development of China's nuclear industry.”

Nuclear power, as well as hydro power and other renewable energy sources, could collectively replace coal as China’s primary sources of power.

China could have an installed nuclear capacity of 182 gigawatts by 2030, an increase of 74 gigawatts over the policy scenario’s goal, according to McKinsey.

China manufactures 70 percent of the equipment necessary for nuclear plants, and the cost for this equipment has been falling. If the country develops nuclear power to the fullest extent, by 2030 carbon emissions could fall by 470 million tons, at a cost of €3 per ton.